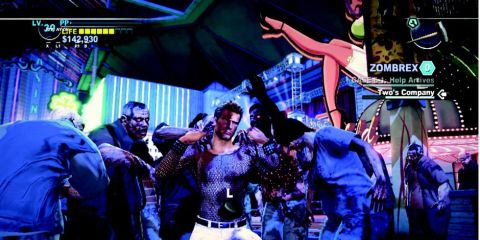 Dead Rising 2 reprises the first game’s use of RPG elements. Chuck earns PP (just like XP, but found earlier in the phone book) for everything he does. The primary big-earners are completing story missions and escorting Fortune City’s various stranded survivors back to the safehouse. But you can also earn fat PP for simply interacting with the city’s various tourist attractions, like so:

All of which adds a brilliantly fleshed-out feel to DR2’s rather jubilant cartoon world. And if you were to be George Romero, it would also add a nice satirical edge to proceedings as you partake in a host of inane entertainment activities in front of a crowd of transixed slack-jawed shamblers. Zombies. Instant metaphor for everything.

PP causes Chuck to level up, and he does this at a nicely balanced rate. Rewards come often enough to keep you constantly engaged, but just infrequently enough to feel significant every time. Level-up bonuses include new combat and evasion moves (the head-bursting DDT is a current favourite), passive abilities like health boosts and speed upgrades (which can also be gained by finding and equipping stat-buffing magazines or mixing the right combinations of drinks in the various blenders dotted around bars and restaurants) and combo cards which you can use to create new weapons. And that last one right there is where Dead Rising 2 takes a big jump onto the fun train and speeds off to Addiction County.

Adding weapon crafting to DR2’s World of Gorecraft line-up of RPG tropes is the masterstroke foundation on which all of its most rewarding and obsessive play rests. Combo cards are essentially recipes for new weapons which list the item combinations needed to build astoundingly creative zombie-abuse tools in Fortune City’s generously placed maintenance rooms.

Want a klaxon horn that explodes zombie heads? Just find a can of spray paint and a traffic cone. Shrapnel bomb more to your liking? Tape a box of nails to a propane tank, stab it onto one of the rotting rotters, and detonate it with a well-placed bullet. Fancy a battle tank? Well surely a wheelchair with mounted machine guns is the next best thing?

And best of all, the crafting system is meticulously blended with Dead Rising 2’s levelling. Every kill with a combo weapon earns you extra PP, and with extra PP earning you more combo cards, you’ll soon find yourself in a gleefully infectious cycle of hilarious kill, hilarious new weapon, and brand new hilarious kill.

Coupled wiith the need to seek out the right weapon parts over every nook and cranny of the city’s entertainment district, this means that Chuck’s downtime between story missions quickly becomes an utterly compulsive cyclical reward for ploughing through the compulsory objectives. Not to mention a source of massive bonuses to your future progression. Should you ever find yourself short of cash or in need of a helpful level-up, fear not. While ‘proper’ RPG level-grinding can be a drag, in Dead Rising 2 it’s pleasingly a far more literal experience:

In fact all things considered, the creativity of DR2’s zombie mulching and the subtly clever layout of its environments - areas are often designed in ways which provide the more thoughtful zombie evader with hidden-in-plain-sight paths from safe-ish spot to safe-ish spot, though they require skilful navigation to use - make it an excellent training simulation/aptitude test for the real-life zombie outbreak of your dreams. If you’re still getting wiped after a weekend with Dead Rising 2, just shoot yourself when the real Z-Day inevitably comes around. You’ll be no use to the rest of us and clearly aren’t meant to make it through.

David Houghton
Long-time GR+ writer Dave has been gaming with immense dedication ever since he failed dismally at some '80s arcade racer on a childhood day at the seaside (due to being too small to reach the controls without help). These days he's an enigmatic blend of beard-stroking narrative discussion and hard-hitting Psycho Crushers.