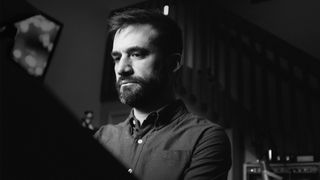 Sony's latest hit, Days Gone, is one of the best-selling games of 2019 so far and we also loved it here at Official PlayStation Magazine. Keeping us company on those long Oregon trails, as we battled the Freaks, was a beautiful original soundtrack by composer Nathan Whitehead. Official PlayStation Magazine #163 came with a free sampler CD, but you can also grab the full soundtrack here (featuring Lewis Capaldi).

In this Nathan Whitehead interview, OPM spoke to the composer about his passion for music, from creating lo-fi cassette mixes in his bedroom as a child, to how it has evolved into a full blown career. He's since written, arranged, and produced scores for films and video games, including The Purge: Election Year. But, as you're about to discover, Days Gone has been a real passion project for the composer.

OPM: How did you get into composing in the first place?

Nathan Whitehead: I was always fascinated by music and tinkering with music as far back as I can remember. We had a family piano where I would pick out tunes and my Mom had a twelve-string guitar that was very interesting to me. One year, we got a Casio SK-1 for Christmas and I became obsessed with it. I started playing guitar a little more seriously around age 10 and I got an electric guitar. I played in poppy punk bands in high school and early college and this led to an interest in studio recording. I put together a very crude home studio.

Originally, I used my sister's cassette-based karaoke machine as my recorder. By using two cassettes I could record on one, swap the cassettes and record on the other one while also adding the previously recorded part from the first cassette. It's a tried and true method of lo-fi multi-tracking. Getting a taste of the studio made me realise that I loved to write music and I love to work in the studio much more than I liked performing. I just wanted to stay in the studio all day every day writing music. I headed to college to study music and studio production and it clicked that composing scores would allow me to never leave the studio! And pretty much from that point, I have never left the studio.

"To score the interactivity in Days Gone, we needed sort of musical building blocks."

As you've composed music for both film and games, what’s the biggest difference in your approach when composing for an interactive medium? What were some surprising overlaps?

Whitehead: The biggest difference composing for an interactive medium is the departure from the purely linear storytelling that you have in a film. I know exactly how the action will play out in a film. I end up watching a film hundreds of times in the process of scoring it and I can shape the music to work with the action onscreen. But in games, you never know what the player will do next. The music has to respond to the actions of the player and that requires a different compositional approach. To score the interactivity in Days Gone, we needed sort of musical building blocks – pieces that could be layered together or connected sequentially to alter the music so that it follows the action of the player.

For example, we did a lot of intensity layers where the score would have a base layer that felt right for Deacon riding his motorcycle in a relatively low-danger scenario. I then wrote one or two more layers to the piece that could be added to the base layer to increase tension, danger, etc. If you play all the layers together, they sound like one piece of music. By adding and subtracting layers, the score can shift appropriately when Deacon, say, rounds a corner and is surprised by a group of Freakers or when he finishes a battle and everything seems safe (for the moment). The game engine is really amazing and it can even turn these layers on or off on a musical beat. The end result is, hopefully, a score that feels like it's tailored to each moment even though we never know what will happen next.

But all of this interactive music happens a bit later in the scoring process. In the beginning, scoring a game is very similar to scoring a film. It was really important early in the process to come up with the main musical themes that would be the foundation for the entire score. I love this phase. At this point, it's kind of free writing focusing only on tone and vibe and trying to find "the sound."

"I knew the Freakers theme would need some unique sounds and textures..."

What do you usually start with when composing?

Whitehead: At the start of a project, I try to get my head in the story and the characters as much as possible. I want to have conversations with the director and really understand the story they hope to tell. I might look at still images or early artwork. I usually start either at the piano, just improvising or I'll start experimenting on a synth or by manipulating a piece of audio. If I know I'm moving in a more melodic direction, then I'll usually take the piano approach. I knew the Freakers theme would need some unique sounds and textures so I actually started that theme by processing some low piano notes, time stretching some cymbal recordings etc. In both approaches I basically start with improvising until something emerges that feels right to me and then I'll start to build on that.

What do you wish more people knew about composing in general and composing for games specifically?

Whitehead: Wow, that is a great question! In general, at least for me, I think people should know that composing is more about buckling down and doing the work and less about music simply popping into my head with a spark of inspiration. Occasionally, there are special moments like that but usually only after spending a lot of time trying to solve a particular problem. Simply getting in the studio and pushing forward every day creates the space for ideas to emerge. Even on days where I didn't write anything I like, putting in that time is somehow a necessary part of the process.

This is where you can find the full official Days Gone soundtrack from composer Nathan Whitehead.

When it comes to composing for games, I would like people to know how massive and wonderful the musical opportunities are. I wrote nearly three hours of music for Days Gone – that's anywhere from two to six film scores! Plus, you have the interactive mechanics on top of that. Occasionally I encounter people who assume scoring a game is somehow not as cool as scoring a movie. While I will always love film, games can be dream projects.

It takes a long time to make a video game and that usually ends up giving the composer a lot of time to develop themes and really make sure the musical world is fully realised. Working on a PlayStation exclusive like Days Gone, the production value is extremely high. I was very fortunate to work with amazing musicians in beautiful studios and generally do whatever was needed to make the score as good as it could be. It's a fantastic opportunity for a composer. I often encounter people who are surprised that so much goes into a game score.

"The Pacific Northwest setting is absolutely beautiful and it really felt like the score needed to connect to this environment as well."

When it comes to your work on Days Gone, what influenced your work? What ideas define this work?

Whitehead: I think the two biggest influences on the Days Gone score are Deacon St. John, our protagonist, and the setting of the Pacific Northwest. Deacon is a biker and a bounty hunter, and biker culture is definitely present in the game. I thought including some guitar in the score could be interesting but writing a score that's all rowdy bar-rock felt wrong.

The Pacific Northwest setting is absolutely beautiful and it really felt like the score needed to connect to this environment as well. It’s rural but extremely different from the rural south. There are high deserts, snowy mountains, massive forests and all these elements look stunning in the game. Deacon and the environment seemed to call for an organic, lived-in sound with a touch of Americana. This led to more guitars being combined with string orchestra and percussion. I had to be careful to not sound too "country". These colours seemed to connect with Deacon on his journey through this beautiful and dangerous landscape.

To me, the ideas that define the score are the tenacity of the human spirit and the value of relationships. Early in the process John Garvin, creative director at Sony Bend Studio, said something along the lines of the game isn't simply about surviving, it also examines why we want to survive. When I heard that, I was instantly excited about all the places the music could go. I found it really interesting to be navigating the survival aspect and also this introspective aspect at the same time.

"When I was playing in bands, I wanted to write so many different styles of music that it created this identity crisis."

Is there a theme or refrain on the Days Gone soundtrack that you’re particularly proud of and why?

Whitehead: I'm quite happy with the Days Gone main theme. It's simple but, to me, it connects to Deacon and some of that introspection I was mentioning. I think it feels like it belongs in this beautiful setting. It has a little bit of melancholy but it's not hopeless and I think it sets the tone well for this dangerous and emotional journey.

When it comes to your work, which frequently asked question do you wish interviewers would stop asking and why?

Whitehead: Ha! You know, I'm not very good with listing my favourite anything so I usually don't enjoy the questions asking about my favourite game or favourite composer. I feel like I have too many favourites, I can't name just one. Plus, they are different from day-to-day. I don't always feel like listening to the same music. Some days I want to see a horror movie, other days I want a drama. This is actually part of why I became a composer. When I was playing in bands, I wanted to write so many different styles of music that it created this identity crisis. I eventually realised that composers get to explore all these different genres and I knew that's what I had to do.

This article first appeared in OPM. For more excellent features like the one you've just read, don't forget to subscribe to the print or digital edition at MyFavouriteMagazines.