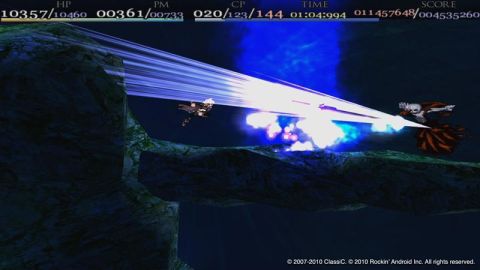 Sometimes, a game’s premise is so clever, original, or plain fun that we’re willing to overlook significant issues because it’s just so damn good. Crescent Pale Mist isn’t exactly one of those games. Its accumulated flaws can’t cripple its awesome ideas because, well, the bland side-scroller doesn’t have a single standout strength. Even its greatest assets are half-hearted and hobbled. So, no, there will be no overlooking of CPM’s significant issues.

The most immediately noticeable blemish is that the game, despite its flashy, BlazBlue-crazy special effects, is just plain ugly. The 2D sprites have jagged edges, like they’ve been ripped from a PlayStation One disc and chucked onto our HDTVs. Coupled with the 3D-rendered backgrounds, where there’s no artistic consistency, it just looks weird.

That the worlds lack any ounce of creativity or variety hurts CPM, too. Not simply because the bland backgrounds repeat like a Hanna-Barbera cartoon, but because this repetition echoes the overall design. The 2D side-scrolling beat-‘em-up isn’t a genre that’s been done well often this generation, and Crescent Pale Mist is the perfect example as to why we’re tired of it: you run side to side, mash some buttons, kill some baddies, roll the credits, and take a nap.

The repetitive stages also hurt the level design, which, despite the linearity of moving side to side, is regularly confusing. Stages are short, sure, but we spent 30 minutes lost in the second world; a checkpoint system couldn’t have hurt, you know. Worse, your character can hop into the foreground and background at certain points, which permits exploration of alternate routes. We can’t decide which reward for deviating we like more: dead ends or new groups of enemies. And by new, as you have probably already surmised, we once again mean “more of the same.”

Even the bosses lack terribly interesting qualities. If you’re not fighting a magic-spamming magician, you’re duking it out with obnoxious monstrosities without defining characteristics. You know, unless aggravating difficulty by way of ludicrously large health bars and screen-hogging size qualify as notable qualities.

These factors contribute to what is easily CPM’s most detrimental fault – it’s hard as hell, and it knows it. Unlike, say, Ikaruga or Bionic Commando, the difficulty’s more reliant on tolerance than skill. You can learn patterned attacks, sure, but enemies are far too strong. Their obscenely large health bars serve only to elongate the dreary experience.

When the best thing your game has going for it is supplemental abilities to support your primary one-button combat, you know you’ve got problems. Yet Crescent Pale Mist opts against adding anything new to a stale formula that only barely passes as enjoyable anymore, and instead adds a lot of things that aren’t conducive to a good time.