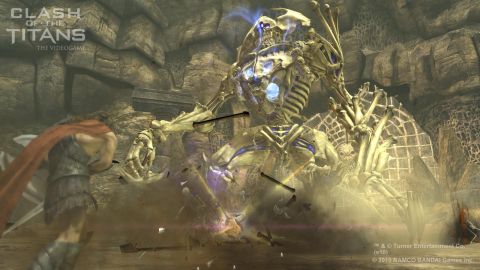 So Perseus is stomping around grungy locales, acting like an ass again is he? No wonder the fella’s so pissed off: you would be too if you were doomed to spend eternity in a succession of skidmark-brown combat areas so small there’s barely enough room to swing a Gorgon’s head. The only stuff of ancient legend here is the creaky hardware used to develop it all.

Clash of the Titans is a graceless hack-‘n’-slasher which would aspire to be described as vanilla. Its one standout feature – and we use the word standout insomuch that it’s semi-successful – is the sub weapon mechanic. When Percy’s not busy bouncing on invisible pogo sticks, poking Bubo the owl for more quests or wincing at his sloppily rendered companions, he’s pinching all manner of secondary weapons from his foes. Swords, spears, bows and even feathers are all up for the taking, and there’s a distinct whiff of Pokemon-style ‘catch ‘em all’ about the hoarding quest.

Certain enemy types are weak against various weapons and every once in a while you’ll need to smash a boulder or a log with a hammer - hence the need to gather and upgrade the essential items by offering gifts to the gods. Only there’s actually very little point, for the missions are so brain-strainingly dull that you’ll be desperately trying to find the button that turns the weapons on yourself instead. Titans won’t clash. Titans will definitely bore.