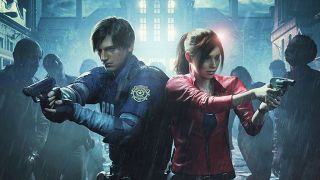 Among the bullet points for the Resident Evil 2 remake: "wetness," "darkness," and "gore". That's according to Twitter user ateliermatangi, who livetweeted Capcom's San Diego Comic-Con panel dedicated to the upcoming game, which gave fans a behind-the-scenes look at development and revealed two special editions coming to stores January 25, 2019.

According to atliermatangi's tweets, Capcom said it wanted to do the project for a long time, but only started getting serious around three years ago, right around the time a fan project dubbed "Resident Evil 2 Reborn" was picking up steam. That story, by the way, ultimately has a happy ending - though RE2 Reborn was shut down, the team was invited to collaborate with Capcom on the official remake.

Capcom also explained that Leon and Claire needed some visual updates to look like they belonged on modern consoles, but since the original Resident Evil 2 had to work around the constraints of the PS1 hardware, the team couldn't do a simple uprez. Instead, the duo were almost completely redesigned, starting from concept sketches drawn way back when and building from there. This way, the characters would be nostalgic, but new. You can see this pretty clearly with the evolution of Leon's design.

from OG leon to today, they wanted to make sure that leon fits the new world pic.twitter.com/J4vSko1YIQJuly 20, 2018

Claire's redesign was a bit more drastic, and Capcom said that "ultimately we had to ditch the hot pants," which, fair enough. While keeping the biker shorts under ripped denim hotpants look would've been a more faithful recreation, I imagine the fashion looking just a bit too last season.

To close out the panel, Capcom revealed a Resident Evil 2 Deluxe Edition and Resident Evil 2 Collector's Edition. The Deluxe Edition, priced $69.99 for North America, will come with two extra costumes for Leon ("Arklay Sheriff" and "Noir"), three costumes for Claire ("Elza Walker," "Military," and "Noir"), the "Samurai Edge - Albert Model" weapon, and an option to swap to the original RE2 soundtrack.

The Collector's Edition, priced at $199.99 and only available via GameStop, adds in a digital soundtrack, artbook, R.P.D. renovation blueprints, and a 12" tall Leon statue. Pre-ordering any copy of the game will get you the "Samurai Edge - Chris model" and "Samurai Edge - Jill model" weapons.

Want to get up close and personal with the Resident Evil 2 remake's horrendous undead? Check out some RE2 remake gameplay, built on the same engine that powers Resident Evil 7.