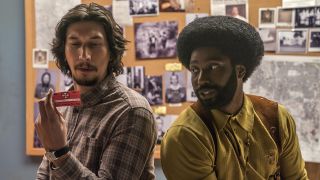 Meanwhile, Ron starts to date Patrice (Spider-Man: Homecoming’s Laura Harrier), the “pig”-hating President of the Student Union who he initially met while working a previous undercover job, reporting back on a Black Power speech. Ron and Patrice have real chemistry, and they’re push-pull dynamic also allows Lee to once more engage in a debate tackled in Malcom X – is change best implemented through aggressive, revolutionary action, or from within the system?

Surprisingly, Lee has a lot of fun with the material, embracing the farcical situation by frequently opting for broad satire as he plays in his powder keg like a kid in a sandpit. Stallworth, when told that his voice sounds different upon pitching up for his first face-to face, replies in a flustered tone, “I have a cold” – an excuse that, Lee assures us, really was given and really did suffice.

As well as being consistently funny, BlacKkKlansman throbs with f-bombs, disco dancing, split screens, loaded movie clips (Gone With the Wind, The Birth of a Nation), big collars, and bigger hair, and also makes for a riveting undercover procedural thriller replete with all the tropes: working out a backstory; going into life-threatening situations wearing a wire; and building towards an explosive climax that effectively tightens the tension by crosscutting between two dynamic and suspenseful scenes.

All of this makes BlacKkKlansman one of Lee’s most accessible movies, a drama that is also a genre piece and boasts the propulsive properties of the director’s more commercial ventures like 25th Hour and Inside Man. And yet it is also one of Lee’s most angry, focused, politically charged films, primed to detonate in Trump’s America. “Let’s bring back America’s… greatness,” says Duke, who was at the vanguard of leading ‘The Organisation’, as he retitled the Klan, out of their robes and hoods and into three-piece suits and Congress. Maybe one day we’ll find representation in the White House, ponder the bigoted thugs. And sure enough, BlacKkKlansman works in documentary footage of the terrible far-right violence in Charlottesville (Malcolm X, lest we forget, featured the beating of Rodney King) and Trump’s gobsmacking response to it, insisting that there were “very fine people” on both sides.

OK, so BlacKkKlansman, like many Spike Lee joints, can hardly be accused of subtlety, but its full-throttle attack, worked into a hugely entertaining narrative, hits hard and true. The world we currently live in has little patience for nuance, so why should Lee?

For more Cannes coverage, read our The House That Jack Built review.