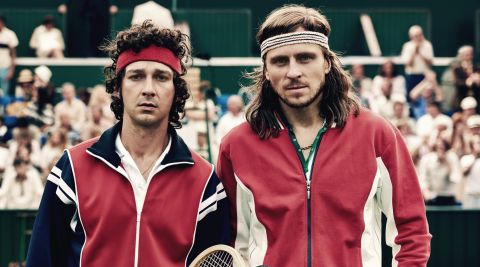 A superior sports biopic with a never-better LaBeouf? You cannot be serious! But it only fully gets to grips with the ice-cool Swede.

Calling Borg vs McEnroe the first truly great tennis movie may seem like damning with faint praise considering the competition – Paul Bettany/Kirsten Dunst romcom Wimbledon (2004) and… er, that’s about it. But it’s a statement meant at face value.

Exploring the rivalry between imperturbable world number one Björn Borg and volatile contender, John McEnroe, in the lead-up to their legendary 1980 Wimbledon final, it’s a clash of the tennis titans that’s infatuated with the formative psychology of sporting icons off the court.

In 1980, Björn Borg (Sverrir Gudnason) was at the top of his game, and on course to win a record fifth consecutive Wimbledon title. But behind the sweat bands it was a different story. Pre-match superstitions increasingly alienate his nearest and dearest, while suppressed childhood anger issues threaten to derail Borg’s dominance of the sport he’s dedicated his life to.

In contrast, McEnroe (Shia LaBeouf) is a firecracker. Wearing his heart on his sleeve, his explosive tantrums make him an easy target for the controversy-hungry media and public, who delight in openly booing him. The pair are perfectly matched combatants – the baseline player and the net rusher, the hot-headed American and nitrogen-cool Swede, the Ice Borg and the Super Brat.

Director Janus Metz (Armadillo) has previous form with the all-time-great tennis rivalry: he helmed an episode of ’90s documentary series Clash of the Titans on Borg and McEnroe, and reunites with writer Ronnie Sandahl for a film that lasers in on the moments that made the men.

The movie jumps back and forth between the 1980 Wimbledon championship and the pair in their youth: Borg is seen learning to keep his career-threatening temper under control, while the source of McEnroe’s rage is left to fester. The thesis: maybe the famous rivals aren’t so different after all.

It’s a compelling case study, and effectively burrows under the skin of Borg in particular. Methodically paced and shot, it perfectly straddles a line between arthouse sensibility and mainstream subject matter, with the match of the century providing a racket-string-tense climax.

But there’s a reason why Borg comes first in that dichotomous title. Sandahl and Metz are enamoured with their Scandi cousin at McEnroe’s expense, dedicating a much meatier chunk of screentime to the Swede. And sops to the tennis-oblivious can come across as patronising.

Not quite a Grand Slam then, but ace nonetheless.

A superior sports biopic with a never-better LaBeouf? You cannot be serious! But it only fully gets to grips with the ice-cool Swede.