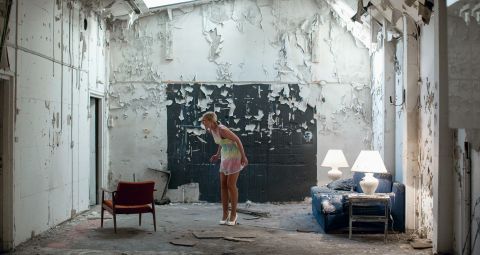 After Eskil Vogt’s script for drug drama Oslo, August 31st (2012), you might be forgiven for expecting his film about a woman turned blind in a cold city to be tough and worthy. Forgiven, but wrong. Playful, unpredictable and occasionally pervy, Vogt’s directorial debut is a perception-teasing provocation, made slippery with mischief but also accessible by its warm wit and winning lead.

It starts with fair warning: adjusting to recent sight loss, author Ingrid (Ellen Dorrit Petersen) declares that it doesn’t matter if she gets details right when she visualises something in her head, just so long as she remembers something. That stress on impressions plays out as we meet three people in her life: sad-sack porn-guzzler Einar (Marius Kolbenstvedt), lonely single mum Elin (Vera Vitali) and cheating husband Morten (Henrik Rafaelsen).

Who, it emerges, aren’t entirely people in her life. Einar and Elin are fantasy figures; Morten is a version of her husband remixed in her imagination. And it’s a vivid imagination. If Ingrid isn’t dreaming up horrors where every bump in her apartment turns creepy, she’s conjuring scenarios where Morten engages in filthy infidelities.

Ingrid’s free-flowing imagination dominates, but Vogt maintains his grip even when ‘reality’ becomes so malleable that a café becomes a bus. His main anchor is Petersen, whose forthright performance highlights the humanity in Ingrid’s whims and wicked wit. Yet despite being the only ‘real’ character, she gets surprisingly sympathetic support from Kolbenstvedt, who could have been merely sleazy.

The direction’s alluring tug reflects Ingrid’s exploratory curiosity in her new sightless world. It’s a tug heightened by immersive sound-mixing and Dogtooth DoP Thimios Bakatakis’s tactile images. Once he has us hooked, Vogt is free to move us without manipulation and, cunningly, to tap into fertile themes about fiction’s uses. Never quite what you expect, Blind is a light-footed treat: it creeps up on you.