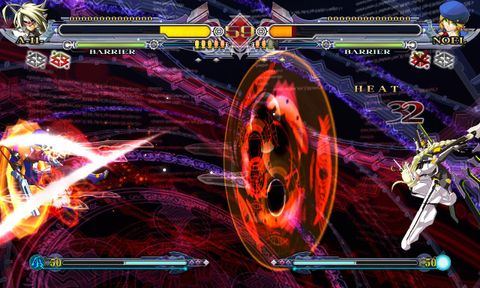 BlazBlue: Continuum Shift (CS) is nothing if not honest, even in the basic tutorial the game’s 12 year old Gothic Lolita berates you for your lack of skill and “The vast rotting expanse you call your head”. Essentially, it’s a perfect microcosm of BlazBlue: If you’re not willing to suffer a little in order to have fun, you might want to look elsewhere. CS is unapologetically Japanese both in its style and approach, offering up a carnival’s worth of fascinatingly bizarre characters while demanding some skill from the player to get the most out of them.

Above: You get one guess to figure out what country popularized sexy nuns with guns

That’s not to say the game is impenetrable for newcomers, CS features a simplified “beginner mode” control scheme that rewards newbies with push button special moves and automatically timed combos. It works better with some characters than others, but for the absolute beginner it makes the game less overwhelming; tap some buttons, have some fun. The new Tutorial mode is also a welcome addition, covering the basics and explaining the game's myriad systems and gauges. Continuum Shift's Challenge mode actually manages to one-up SFIV's Trial mode, giving the player detailed descriptions and video playback on how to do each challenge while actually helping you learn how to use each character.

BlazBlue’s strongest suit, much like its Arc System Works sibling Guilty Gear, is its radically inventive character design, both visually and technically. Characters in this game instantly stand out, and the radical color selections make them even more stunning. If there’s a case for what can be done with modern hardware and pixel art, this is it. From the “No-Face” like Arakune to the neo-robo samurai Hakumen, every character is gorgeous and stunningly animated, but it’s not just the character’s visual differences that make them individual. Even Street Fighter’s strongest supporters will admit that the game’s diverse roster contains some almost-duplicates, characters that are different, but share the bulk of their playstyle with other characters. BlazBlue can’t be accused of the same; each character in the game feels totally unique and most offer radical, bizarre tactical options.

The game itself sticks to the kind of combo-centric play that Arc System games are famous for, which means that unless you’re playing as the bruiser Iron Tager, individual hits won’t do very much damage; combos, even the most basic ones, are essential to winning. Unlike other fighters, CS doesn’t place a lot of value in projectiles; most do little damage and are designed to get you into a combo or counter an opponent. Matches are far more aerial in CS, and the characters much too speedy to be pressured with fireballs.

CS holds onto the same control scheme as Calamity Trigger: Light, Medium, Strong, Special/Drive attack buttons. The drive button is similar to Super Smash Bros’ in that it unleashes a character specific move, usually depending on what direction you push. In the case of Carl Clover, the Drive button allows him to independently control his huge robotic puppet in the background, giving him the ability to attack opponents from two sides at once. If that sounds deadly, it’s because it is, but learning how to position yourself and your robot to take advantage of the tactic is harder than it sounds. Other character’s special button attacks are more conventional, like special sword strikes or unique counter moves. Figuring out each character’s Drive attack gives you a good insight into how they’re supposed to be played and where their strengths lie.

Down are up ell, ex why be?