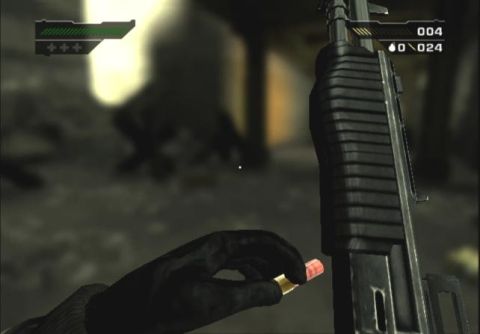 Expectations, eh? While Black is technically flawless, painstakingly designed and probably the best single-player shooter on PS2, we can't help but feel a little disappointed. Why? Because it doesn't keep its promise to "do for first-person shooters what Burnout did for cars".

Burnout changed the way we looked at racing games, with its speed, hypnotic structure (one nudge meant an instant crash) and benchmark graphics. Black's victory isn't innovation, but execution.

Forget the plot - its some nonsense about a rogue arms dealer in Eastern Europe. Black is about guns. A near-pornographic, Hollywood-amplified celebration of big guns. From the Pistol to the AK47 to the Magnum, every weapon glints with steely menace - feeling sufficiently weighty due to a sublime combination of sound effects, pad rumbling and 'heavy' reload animations.

Fire an Uzi at a hotel sign, and it splits letter-by-letter down the middle, Fire a shotgun at a steel door, and it clangs off its hinges - there are no 'interact' buttons in Black.

The damage can be misleading, though. Early tech demos of Black suggested you'd be able to destroy everything, with 3D debris and real-time deformation, but when you start blasting at the walls in the opening room, they merely scar with a flat 'generic damage texture'.

While most scenery is destructible, its effect is often cosmetic. Most times, you just need to find the gas boiler/petrol can/explosives 'conveniently' left by suspiciously large groups of enemies and fire away - like most 'normal' shooters.

There are killer moments, like firing an RPG rocket into a skyscraper in the opening level and watching six floors detonate in a shower of bodies and glass; or sniping in the graveyard, and blowing up headstones to reveal your enemies' position.

The opening level is mildly disappointing. For all the feeling of menace (bullets whizz from all directions) and almost farcical levels of destruction, there's no real feeling of danger, since health packs are plentiful - it's typical EA.

However, the game soon gets tough. You need to conserve ammo, use cover and juggle weapons tactically (you can only carry two) - run in gung-ho and you'll get decimated. The Asylum level (the game's best) is so intense, it almost resembles Pac-Man. There are so many foes, you have to charge in and pray they'll drop health packs to keep you going to the next man, since its too dangerous to sit back and play the percentages.