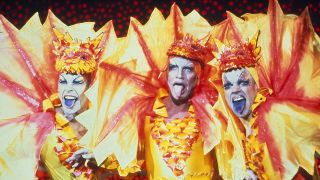 The greatest thing about LGBTQ cinema? That'll be the greatest thing about all cinema - terrific stories and compelling characters revealed through a nice wodge of plot. See, the 'gay movie' tag is flexible. It can mean loads of things depending on the film in question. You might have a gay flick that's tackle a character's sexuality or one that just happens to involve gay characters. Then there's all the other genres thrown into the mix; horror, sci-fi, romance, fantasy, thriller... the list goes on. What follows are the top 25 gay movies, showcasing the vibrant, albeit oftentimes difficult lives of these characters.

The movie:  40 years on this Sidney Lumet's movie still packs a punch. Based on the real-life story of a Brooklyn bank robbery gone wrong - during a mega-hot summer - it combines solid drama with a fast pace. Bad boy Sonny (Al Pacino) plans a bank heist that will help him pay for his male lover's (Chris Sarandon) sex change operation.

Why it's worth a watch: Such an earnest situation at the time pushed at the mainstream movie boundaries. The real brilliance of the script is how damn funny it is. From the third member of the heist crew who bails, to Sal's suggestion of Wyoming when asked which country he'd like to escape to, you'll find yourself chuckling frequently.

The movie: Years before he terrorised his Suicide Squad cast members with dead animals and used contraceptives, Jared Leto's "method approach" earned him an Oscar. Jean-Marc Valle's no-frills biopic also snagged his co-star Matthew McConaughey an award for his stellar portrayal. And that's just one fascinating aspect of this moving, gorgeously-crafted movie. Like your tearjerkers? Look no further.

Why it's worth a watch: Though Leto is magnificent this is McConaughey's show. Outdoing Christian Bale in the method stakes by shedding loads of weight, the comeback king plays AIDS sufferer Ron Woodroof, whose unconventional approach to self-medication sees him become a beacon of hope for those living with AIDS.

The movie: Directed by celebrated gay auteur Gregg Araki, who dabbles with LGBT in practically every one of his movies, we follow the lives of Neil (Joseph Gordon-Levitt) and Brian (Brady Corbet). The pair share a tragic event in their past, which sends them off in wildly different directions - one becomes a male prostitute, the other an alien abduction obsessive.

Why it's worth a watch: It's not the happiest film, yet Mysterious Skin is nevertheless a rewarding drama that deals with some really difficult issues in a sensitive and compelling way. Plus, didja read the bit about aliens?

The movie: Ol Parker's quaint British comedy is a by-the-numbers romance that was originally intended to be played straight; woman meets mysterious stranger on her wedding day and proceeds to fall in love with them. After a serious overhaul, Piper Perabo's bride locks eyes with Lena Headey's sexy florist (yep, Cersei) as she trots down the aisle. It's a refreshingly upbeat lesbian pic.

Why it's worth a watch: In a world where gay characters are regularly sidelined as comedic relief, Imagine Me and You puts them front and center. They're still funny, mind, but the whole thing's about them. Brilliant!

The movie: This Hong Kong drama charts the rocky relationship between Ho Po-Wing (Leslie Cheung) and Lai Yiu-fai (Tony Leung Chiu-Wai). The pair take a trip to Argentina in the hope that it will breathe some life into their partnership. Doesn't quite work out. They break up, they make up, and the backdrops to all of their squabbles are stunning.

Why it's worth a watch: It's a confident and stylish offering from director Wong Kar-wait, who insists that the point of the movie isn't to become 'another gay film' but simply as a portrait of modern romance, regardless of gender. Hurrah.