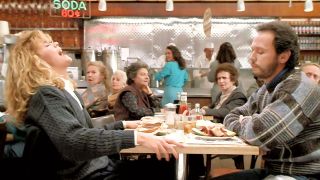 If 1970s Hollywood was ruled by the auteurs, groundbreaking directors like Francis Ford Coppola and Martin Scorsese who made critically adored “serious” films, the 1980s belonged to blockbusters. In the wake of Jaws and Star Wars, however, many of the best 80s movies upped the spectacle on anything previously seen on a cinema screen.

But for much of the 1980s, action cinema wasn’t just about the biggest explosions or the wildest stunts. Filmmakers like Robert Zemeckis, James Cameron, John Hughes and most notably Steven Spielberg made movies that created the zeitgeist, which resonated with viewers and made them want to go back to the cinema again and again – and then watch the movies at home on VHS. Many of the best 80s movies are the ones that people fall head over heels in love with – the ones you can quote word-for-word, or remember every musical cue.

There’s not a single Best Picture Oscar-winner on our list of the 25 best 80s movies, but the films here have won the long game to become integral parts of modern popular culture. Be honest – would you rather watch 1981 Academy Award-winner Chariots of Fire or Raiders of the Lost Ark, one of the movies it pipped?

From Aliens to Airplane!, Back To The Future to The Breakfast Club, the best 80s movies here remain among the most popular, rewatchable films of all time – and they’ll still be filling many people’s Best Of lists 30 years from now.

Back to the Future director Robert Zemeckis has described the idea of remaking Back to the Future as “outrageous” and he’s right. His time travel classic isn’t just one of the best 80s movies, it’s one of those rare examples of a perfect film where everything works like, well, clockwork.

Every single scene – with the possible exception of Marty McFly singing “Johnny B. Goode” – exists to progress the narrative in some way, whether it’s showing the geography of Hill Valley, or explaining how time travel works. But the true genius of Back to the Future is the way it takes an ordinary mid-80s teen and takes him back to the 50s to meet his parents at the same age, answering that eternal “what if” question – would I be friends with my mum and dad if we met at school? Beyond that, it’s funny, the characters are memorable, the in-jokes and catchphrases work, and the internal logic of the timey-wimey stuff makes total sense. Utterly timeless.

Most iconic moment: Marty’s desperate dash to reach 88 MPH when lightning strikes, as Doc Brown does his best Harold Lloyd impression on the clocktower. A scene so good it appears in all three Back to the Future movies.

It’s hard to believe that Steven Spielberg had something to prove when he made Raiders of the Lost Ark, but the disappointing performance of World War 2 comedy 1941 meant the director behind Jaws and Close Encounters of the Third Kind had to establish his credentials all over again. After Raiders he’d never have to worry about that again.

Raiders is the ultimate adventure movie, a tightly paced, endlessly inventive hunt for the Ark of the Covenant that instantly made the Bond of the era look past his sell-by date – notably 007 gets nowhere near any list of the best 80s movies. Perfectly embodied by Harrison Ford, Indiana Jones arrives a fully-formed (if reluctant) hero, a university lecturer by day, obtainer of rare antiquities by night with a unique, but very cool, sense of style. It also has one of the most hummable themes in history – thanks, John Williams!

Most iconic moment: Facing a tricky battle with a master swordsman, Indy takes the practical option and shoots him before the duel begins.

Still the Episode against which all other Star Wars movies are judged, The Empire Strikes Back rewrote the rulebook on what a blockbuster sequel could be. Far more than just a retread of the original, it expands the mythology of A New Hope while putting Luke Skywalker, Han Solo, Princess Leia and the rest through hell – Darth Vader and the Empire certainly deliver on the promise of the title.

Alongside some of the saga’s most memorable action set-pieces (AT-ATs in the snow! Asteroids!), it’s the emotional beats that resonate most – not something you can often say about Star Wars – as Han and Leia fall in love, Han gets frozen, and Luke learns his dad isn’t dead after all. Boldest of all, it ends on the ultimate downer – at least the world always knew Return of the Jedi was coming three years later.

Most iconic moment: Han being encased in carbonite runs it close, but Darth Vader’s “I am your father” declaration turned the saga on its head.

Ridley Scott had already made one genre-defining sci-fi movie when he took a trip to the rain-soaked Los Angeles of 2019. Blade Runner made it two for two, because his follow-up to Alien is every bit as imitated as his spaceship horror, still the definitive vision of a dystopian future city.

Star Harrison Ford was bang on the money when he said his Rick Deckard is a “detective who doesn’t do any detecting”, but the near absence of plot doesn’t really matter when everything else about Deckard’s hunt for rogue android “replicants” – from the cityscapes to Vangelis’s amazingly moody synth score – is so stylish. Still iconic, whichever of Scott’s many cuts you end up watching.

Most iconic moment: Lead replicant Roy Batty’s moving “tears in rain” speech – rarely have we seen such a poignant “time to die”.

The funniest film ever made? Certainly few have a higher gag rate than a precision-engineered comedy that fires puns, sight gags, movie spoofs and moments of pure weirdness at the screen with relentless, joyous energy.

The movie’s smartest move comes in playing everything totally straight – the filmmakers bagged the rights to 1957 airplane disaster movie Zero Hour! (much of the dialogue is lifted directly), while Elmer Bernstein’s score is every bit as bombastic as the genre the movie lampoons. The filmmakers also win extra points for realising that Leslie Nielsen – up to that point a serious actor – had an undiscovered knack for deadpan comedy. Who knew?

Most iconic moment: “Surely you can’t be serious?”

“I am serious. And don’t call me Shirley.”

Turn to page two for more of our picks of the best 80s movies of all time...