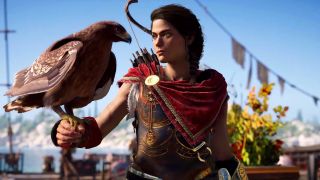 There’s something about Kassandra. Admit it, you miss her a bit as you’re wandering in that cowboy game. It’s ok to say that Assassin’s Creed Odyssey’s female misthios is stuck in your head like a particularly good shot from a Predator arrow. She might have the same script as alternate Ancient Greek proto-Assassin Alexios, but Kassandra has an allure that very few hood-wearers have even come close to. Her bravery, heart, and those arms that we’ll get onto later - steady - have an appeal that makes her, and this hundred hour or so Odyssey truly unique.

Kassandra obviously isn’t the work of one person. Ubisoft’s writers, designers, and animators combine to make our favourite misthios who she is. But it’s Game Award nominated Greek-Canadian voice actress Melissanthi Mahut who’s the one that brings an almost dangerously compassionate level of emotion to the table, no matter how we decide to act in game. “When they were first talking to us about the protagonists I thought ‘I know this character, I know this type of person.’ She was very, very familiar to me, and I thought it was a wonderful opportunity to create or add elements of all the dynamic women that I have known in my life into bits and pieces of this character,” explains Mahut.

Woman in the mirror

The fact that Kassandra can be anyone, for anyone, is what we love as we send her into battle, attempt to keep the peace, or dive into the Ancient Greek underwear of everyone that offers up that not-so-elusive heart next to a dialogue option. However you’re feeling, Kassandra can reflect your fury, desire for vengeance, or, joyously, sexuality but she isn’t a puppet. We might decide who she does or, indeed, doesn’t wrap those scarred burly arms around but Kassandra still feels like her. It’s this reflection of us as complex beasts, if not mythical ones, that Mahut enjoys the most.

“Nobody is just one thing,” she says. “You can be all these different versions of yourself in any kind of environment that you might find yourself in. It was a wonderful challenge but I ended up really loving the character of Kassandra because I thought I could also really relate to who she is. This really, really strong female character who isn’t actually trying to prove her strength to anyone really. She just is and that was such a nice opportunity to be able to play that. She can be aggressive, she can be funny, she can be a bit full of herself at times and down to earth at other times. I just love the journey of the character.”

And did she know that we would all get gooey-eyed over Kassandra in quite such a ridiculous manner? “Obviously when you are doing a project, there’s the bit in the middle and near the end,” laughs Mahut. “In the middle you are hoping you are in the right direction, near the end you’re like ‘I’m near the end and I hope I have done a good job so far but it’s not really in my hands from now on.’ All the while I was hoping but I didn’t actually realise it was going to have such an impact. My mind is blown by how much people have been able to relate. It’s such a gift.”

Mahut didn’t just lend her voice to Kassandra. She spent a long time covered in tiny black balls and surrounded by cameras along with the rest of the cast. “We did a lot of mo-cap. I think the proper ratio would be maybe 75% VO to 25% mo-cap,” she confirms. “It was so much fun. The first experience was a bit daunting because everyone had done mo-cap before and I hadn’t. It was like ‘holy shit, I really hope I don’t screw this up.’ Once you get the hang of that a little bit, you realise how liberating it is in terms of experience because you just have to use your imagination and your fellow actors. You just play off each other and be as true to the character as much as you can without any other distractions around you.”

For anyone who has sent Kassandra happily somersaulting off a cliff and remained impervious to damage (once she hits a certain level, don’t @ me with your splatted mercenary), it’s probably clear that Mahut didn’t get to do all of her own stunts. “I love doing fight scenes but obviously the really, really cool stuff is unfortunately done by stuntmen, much to my dismay,” she explains.

“Any kind of movement that would involve somersaults or jumping from a height, because the camera jolts and it is really expensive material, we couldn’t really do it. They had to use us for the facial expressions though so for some of the fight scenes we would be along, right next to the stuntmen copying their movements. Then we would be doing the same thing but slightly lower key than they were doing. We got to do quite a lot of that. Unfortunately not all of it but the fight scenes and stuff, I enjoyed that.”

Assassin’s Creed Odyssey’s mo-cap doesn’t just bring sprawling fight scenes to life though. It’s in its quieter cut scenes, as Kassandra talks to Phoibe or other children, that she truly comes to life. Her eyes change, and an honesty and amusement appears that we perhaps haven’t seen before. It’s this clarity that Mahut brings to the table effortlessly. “It is important. Because she is a mercenary. It’s a tricky upbringing and a harsh upbringing but it doesn’t mean that we’re talking about someone who doesn’t have a heart and feelings underneath,” she explains. “She is going to be more defensive when it comes to some people and more open when it comes to others. It doesn’t mean that your path defines who you are. You can change it and shape it into who you eventually end up being.”

We all know that sometimes it’s hard being a mercenary. When you’re in a tomb for instance, and lighting a torch but stand a little too close to the flame and before you know it you’ve lit up like an Ancient Greek Christmas tree of fiery pain. It’s easy to forget that someone has to literally take the hit for you playing with matches. “I love that you chose that one out of all of them,” Mahut laughs.

“The hardest thing for me to do was pretending to be on fire! How do you do that?! The first time, the line was ‘out fire, out!’ or ‘begone fire!.’ I loved that.

While we’re on the topic of voice, it feels like the perfect time to bring up a certain word that spills out of Kassandra’s mouth regularly. “Look, Malaka has ended up being a word that you can kind of put anywhere,” Mahut explains. “Malaka has ended up being a replacement for how you would use ‘fuck’ in a conversation. It could be a term of endearment. It could be aggressive. It could be annoying. But the official meaning of malaka is wanker. I don’t know how you can use wanker as a term of endearment but we do use it as such.” Good, now that’s cleared up, we can continue.

Love and lust in Ancient Greece

There’s been plenty of discussion around Alexios vs Kassandra and, while we know who would win in a fight, Mahut and Alexios’ voice actor Michael Antonakos communicated constantly. “Michael and I worked very closely together because we were essentially playing the same character,” she explains. “Different nuances but it is the same character who goes through the same story. To be able to exchange information and ideas, sound things back and forth and to make sure that we were on the right or same track. To make sure that we were still thinking the same way about the character.”

And was there a rivalry about who more people would play as?  “Michael from the very very beginning said that a lot of people are going to love Kassandra. I didn’t really take him that seriously,” laughs Mahut. “I thought he was just being very nice. Apart from a couple of jokes, we didn’t really discuss that. We had so much fun with the character. One of the very many reasons that I am grateful to Ubisoft is that I got to meet and work with Michael who is an absolute joy to be around.“

It’s not hard to see Kassandra’s importance in the video game landscape. An unashamed female warrior with a will of her, and indeed, our own. A knight in shining Greek armour, who joins Aloy as one of the last couple of years excellent examples of women in games who make you want to stand up and roar. Thankfully she just laughs when I talk about Kassandra’s arms but Mahut knows how important the mercenary is. “One of my main concerns was that before Assassin’s Creed, my experience with video games was not very rich. That’s a bit of an understatement. From the little that I knew about video games up until this point, was not to make Kassandra a female version of what came before,” she explains.

“To have empathy and compassion and be human and whatever it means to be a female warrior. It’s not a different version of, but a female warrior within her own right. I’m very very glad that it has sparked conversation because these are the kind of conversations we need to be having. I think it’s very important. And a lot of friends have said that ‘oh, my niece is playing Kassandra’ and they send me little videos of an ten year old niece with a little braid, kicking ass. It’s a wonderful gift to see that it has a positive impact.”