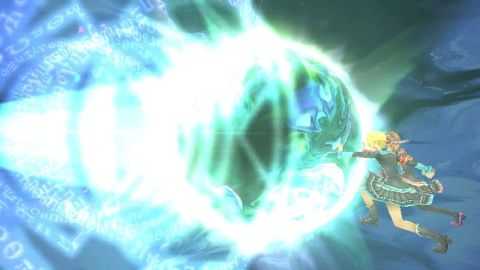 Let's get straight to the point: Arc Rise Fantasia is an aggressively bland but competent JRPG. Its predictable story won't captivate you with any originality, andits battle system won't engross you with any deep strategy.On the other hand,its gameplay won't frustrate you with any glaring flaws either. If you made a bingo sheet full of RPG clich%26eacute;s, ARF would nearly fill every square. "Average guy" main character who turns out to be descended from a race of magical ancients and/or deities? Check. Mysterious magical girl from a foreign land? Check. Best friend who betrays you? Check. Stilted dialogue? Oh man:

The turn-based battle system is simple yet still offers lots of options. You start each turn with a certain amount of action points (AP) that you can spend on various actions, each of which have an AP cost depending on how powerful they are. You've got your basic attack and magic options, with a basic elemental system for magic. Very standard so far.

You also have an option called Excel Act, which you use by expending a percentage of SP (each character has an SP gauge which fills automatically during battle), and range from powerful attacks to status boosts. Then there's the Arm Force option, which is determined by the Arm Force upgrades you have equipped to your weapon, and usually involve buffs and protections. Your main character, L'Arc, also has an option to summon powerful entities called Rogress that work like Final Fantasy summons, which he can call forth when his RP meter fills.

The variety of options available to each of your characters during battle definitely adds interest and keeps battles from getting super repetitive, and an additional combo system is a fun touch (attack an enemy multiple times to automatically start a chain combo that does bonus damage), but the problem is that even with so many different ways to defeat an enemy, all these options don't equate to strategic gameplay. Most of the enemies in each dungeon are laughably easy even if you haven't done any level padding whatsoever. Just spam attack and you're good to go. Yes, there's a basic elemental magic system and certain enemies are weak to fire or water attacks and so forth, but it's not exactly difficult to figure out that you hit the enemy that's weak to earth with earth, and most of the time the battles are so easy that you won't be tempted to waste your precious MP anyway.

The only challenge Arc Rise presents is in its boss battles, but they're not challenging in a strategic way %26ndash; bosses just do a lot of damage. Which means often your only option is to go back and grind in the dungeon to gain a few levels before trying again. When it merely comes down to brute force, victory isn't that satisfying.

In addition to the normal turn-based battle option, there's also a "Tactics" option which has less to do with anything tactical and more to do with just letting AI take over your battles. If you choose to use the Tactics option at any point, AI completely takes over for your party for one full turn based on a handful of broad behavior presets like adaptive, attack only, etc. Hybrid tactics systems where you select behavioral presets for teammates have worked well in other RPGs (Star Ocean, Tales of Vesperia, FFXIII), but those battle systems employ a mix of tactical AI management and hands-on decision making, whereas Arc Rise Fantasia only gives you an either-or option %26ndash; either play the turn based battles yourself, or have the AI do it for you.

It's a really bizarre feature for an RPG to have, because when you opt to use Tactics you completely remove yourself from the battle altogether and merely watch it play out. The Tactics tutorial even warns that if you let the characters act for themselves (i.e. let the AI decide what to do) they might do something "silly," which sounds like the tutorial is actually warning you against using it and admitting that the AI is bad. Not good. Either way, it seems like a useless feature because anyone who doesn't want to actually play the turn-based battles themselves probably shouldn't be playing this game in the first place. The misstep of the Tactics system can't be counted as too much of a negative though since it's completely optional and easy to ignore (and we do recommend ignoring it).

Arc Rise Fantasia is one of those games that doesn't do a whole lot wrong, but doesn't do a whole lot right either. The battle system works well enough, the story is comprehensible, and the graphics are actually quite pretty, FAWG (for a Wii game). But it couldn't be more generic if it tried. That's not going to bother everybody though, and ultimately it comes down to a matter of taste %26ndash; that is, whether you have any or not. Kidding! But seriously, there's something to be said for comforting familiarity at times, and occasionally you might be in the mood to just sit down with something completely predictable and safe, that you can kind of just relax and hit buttons for awhile. It's also not like there are many JPRG options on Wii right now, so if you're really eager to play a traditional, if uninspired, RPG on Wii, Arc Rise definitely offers a respectable 40-ish hour experience %26ndash; just don't expect it to throw you any curve balls.