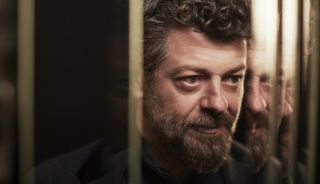 It's almost an injustice that hearing the name Andy Serkis immediately makes you think of Gollum. First of all, he's actually a very charismatic guy with a great head of hair of hair, and second, ever since that Lord of the Rings performance he's very very been busy. Not least with his work in the world of games - Heavenly Sword, Enslaved: Odyssey to the West - and now Planet of the Apes: Last Frontier, developed by his studio The Imaginarium.

The game builds on the interactive fiction foundations laid down by companies like Telltale Games, offering you the chance to experience the Planet of the Apes from both sides of the species barrier. You can play with friends, too - using extra controllers or Sony's PlayLink  - with players voting on the right course of action.

We spoke to Serkis to find out why he wanted to tell his own story in the Planet of the Apes universe, and why Last Frontier was the way to do it. He also talks about how performance capture could change the face of games, and why virtual reality is an exciting prospect.

GamesRadar+: What was it about Planet of the Apes: Last Frontier that made you want to make time for the project?
Andy Serkis: I'm absolutely fascinated by and in love with the apes metaphor. I was a huge fan of the original movies, and then I got the opportunity to work on the reboot, the origin story, and the last three films.

One of the things that fascinated me was how open-ended these stories could be. We've had a particular arc in the last three movies, which has created a mythology of the seminal ape character - Caesar, who is the sort of Moses character that's led his people to freedom. But his is, by no means, the only story. They might say this is the point of ape history where we were freed from bondage, but actually there are other survivors, there are other apes out there, there are other humans out there who have survived the virus, and we very much wanted to investigate a parallel story.

So [Planet of the Apes: Last Frontier] takes place between Dawn and War. We didn't want to make a sort of video game of the movie, because that didn't interest me in the slightest. We wanted to make something that was its own thing and defined by its storytelling methods.

So we at Imaginarium sat down and created this choice-based game idea where you can play as apes and human beings. In the same way that the film doesn't judge who you are, whether you're an ape or a human who sees the world from the ape's point of view, all the characters are drawn in a very three-dimensional way. There are no ultimate villains, it's not black and white, there's all shades of grey with the characterizations.

We also wanted to create this immersive narrative that you become part of that really makes you question your own morality. It reflects who you are and your choices, your philosophical choices; are you someone who wants to see the destruction of a species so that yours can survive? Or are you someone who thinks there's a possibility for living cooperatively and seeking a peaceful resolution to conflict?

Games are notoriously difficult to write good stories for, especially in a game like Last Frontier where you offer the player so many choices. What challenges did that bring about? We wanted to do a moral maze of a game, and particularly it works well as a collective experience, so that you can play with up to four people. And as the decisions get tougher, it questions who you are in relation to your fellow players. You can use an override facility, but you only have one go at that. It's something that works particularly well when you're having to cooperate – or go against – your fellow player. And I think that is really fascinating.

You've worked in film and video games; how do the two mediums differ when it came to performance capture?
[In 2004] I came back from making King Kong with Peter Jackson and was approached by Ninja Theory and made Heavenly Sword. I was fascinated with the idea of seeing the potential of what we'd created in the film industry, and being able to take it to video games. It wasn't a beloved form of expression by the film industry. It was looked down on and sneered upon, in fact.

Ninja Theory really wanted to push the envelope in terms of performance, engaging emotional characters, and story in this new video game, so they asked me to direct the performance capture for Heavenly Sword and to be in it. I just loved the idea that we spend so much time in the movie world developing script, developing characters, making sure that they're emotionally engaging - and why shouldn't there be that level of interaction within the video game world?

It seemed to be a sort of turning point around then, because at the time, cutscenes were very much scorned upon by gamers, as you'll probably remember. You had to get through them so you could get onto the gameplay, and what Ninja Theory was trying to do was to say "Well, look... the only reason that they're not engaging is that they're not well acted, and they don't mean anything - there's no context and they're not well written."

How do you see performance capture going forward in both movies and games, and how do you see storytelling changing to make the most of that resource?
There's a lot of desire and interest from the film world in terms of screenwriters, and actors who now want to be in video games, who want to expand their palate and play in different arenas. So I think that's really exciting.

I suppose I've been fairly evangelical about it, because I really believe that it's a great egalitarian tool for actors. They can play anything. It's the end of typecasting, really – regardless of who you are, your shape, your size, your sex, your color, your height, your age – you can actually embody any character. I love the possibilities of that idea.

So now, you see this traffic of really good actors who want to be in video games, and good screenwriters who want to write scripts for video games. That certainly wasn't the case when I started out. I remember thinking we were lucky to get the cast that we got when we were doing Heavenly Sword. It was pretty early for that sort of thing.

Also, modern video game engines like Unreal by Epic and Unity are huge in the film industry. Virtual production starts with a video game engine, and pre-vis and all of those tools that have been [around] from Avatar onwards, wouldn't be there if it not for the incredible artistry and triumph and engineering that comes from video games, so we are very much better off for that.

And now you see things like Unreal games where you can now capture, edit, and pretty much put out – certainly for television – you could put out a fully finished product in a rapid turnaround. And as you know in terms of [movies like] Rogue One have several shots which are fully rendered in Unreal which is an extraordinary thing, you'd have never have thought that would be the case.

Is virtual reality something you've wanted to play with at all?
That's part of our mission at the Imaginarium – we're evolving projects with that in mind, along with mixed reality - and a combination of live and site-specific theater -  augmented reality but in the virtual world, I'm fascinated with that.

And going back to one of my mission statements: when we first started the Imaginarium, the plan was to create all of Shakespeare's plays as interactive video games. To actually be able to create those in the virtual world, in 360 degrees, is certainly somewhere we're intending to go.

This interview has been edited and condensed for clarity.