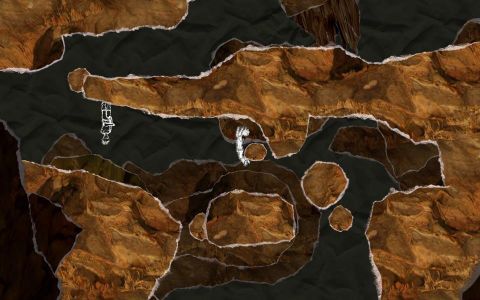 We take it you’ve all seen Inception. Good, wasn’t it? Rather than get bogged down in debate over who was dreaming or what was being dreamed, cast your mind back to Joseph Gordon-Levitt’s amazing bit of hotel wall-running. As his world loses its center of gravity he finds walls becoming floor, becoming ceiling, becoming walls again. Audacious stuff. Good news, readers: And Yet It Moves is basically That Scene in Inception: The Videogame.

In And Yet It Moves, the world literally revolves around you. Egomaniacs pay attention. Holding A and twisting the remote pivots the entire landscape around our papery avatar. On paper – and the whole thing is made from torn-up paper – And Yet It Moves is a platformer - the hook being that if the platforms don’t take your fancy you can twist yourself new ones. A tree blocking your way is easily walked up at 90 degrees. Twist another 90 and the branches will cradle paper man from falling into the sky.

Developer Broken Rules milks great larks from the mechanic. Starting with obvious danger avoidance – rolling massive boulders away from your frail frame, for example – it’s not long before you’re shepherding bats around cave networks, reuniting a monkey with his precious banana and tilting a horned hamster into clearing up cave-ins. When it comes to ideas per minute, And Yet It Moves racks up Mario Galaxy numbers. And like Galaxy there’s a surreal beauty to it all. When objects begin rotating within the rotating screen, it almost feels like platforming in a kaleidoscope.

There are ideas here that could support their own game. Later puzzles involving a mirrored doppelganger – you move left, he moves right – ask you to change the landscape, bearing in mind how it will reflect upon two characters. This truly is the rub the tummy and pat the head of gaming. But like the best action puzzlers, And Yet It Moves marries the skill of thinking with the act of doing. Solving the conundrum satisfies the mind, while actually enacting it pleases the fingers. There’s no lame insta-death here– you die by your own hand.

What makes for a satisfyingly challenging four or five hours is bolstered by unlockable modes. This is that rare game where time trials make perfect sense. Cutting corners, if not whole chunks of levels, with a well timed twist is compelling stuff. Even better are Survival and Puzzle mode. The former limits you to one life, eliminating daredevil antics and forcing you to embrace careful, planned play. Puzzle mode limits the number of twists, turning each level into an exercise in precision. Any fool can tweak to victory; here every move counts. Wonderfully designed and lovingly executed, And Yet It Moves is the WiiWare game of our dreams. Or Leonardo DiCaprio’s. We’re confused.