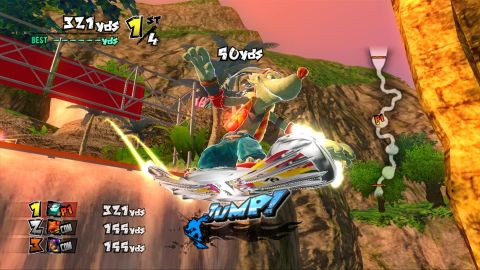 We are simultaneously the world's greatest and the world's worst Adrenalin Misfits players. We completely dominate every trick competition, but can barely manage to place in the more traditional races. The worst part is, we're not even sure why.

Well, that's not entirely true. The culprit is certainly highly questionable controls. Boarding down a mountain almost always involved three things: slamming into walls, slamming into opposing players, and randomly skidding to a halt. This is a result of the overly sensitive Kinect controls being unable to distinguish a light lean from an attempt at a hairpin turn. And, occasionally, an attempted turn would transform into our boarder digging in his heels and stopping. Wonderful.

But once we got ourselves to a ramp and into the air, oh man we could not be stopped. Dozens of spins, flips, grabs, and grinds later, we had finished every trick event with relative ease.

We'd love to make the claim that it was all because of our great skill, but we've got a confession: we had no idea how exactly we managed to pull it all off. Spins are (theoretically) done by twisting our bodies, grabs by lifting our legs into various positions, and grinds by leaning back and forth to balance. More often than not, however, our avatar just went ahead and did whatever he wanted in the air with no concern for what we wanted him to do, causing several sideways landings and faceplants. Oh, and despite rolling through the tutorial several times and reading the instruction manual front to back, we're still not sure how we got our character to do a backflip.

Now, it's not all bad. Multiplayer works just fine, but that could just be because both players are equally bad at controlling their boarder. Equal skill means more fun, right? There's also a lot to unlock, from various characters to tons of different hoverboards with different stats, as well as a variety of levels in different locales (the hoverboards allow for any sort of terrain to be ridden, from waterfalls to deserts to lava). Oh, and the menus are easy to navigate with the Kinect controls. But that just seems like we're reaching to find something good.

If you were hoping for a Kinect-friendly great snowboarding game, this isn't the one. It controls terribly and is just plain uninteresting. Don't bother unless you're desperate for some XTREEM action. And we mean XTREEM in the worst possible manner.