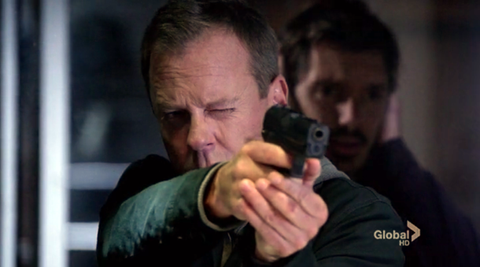 THE ONE WHERE Martin takes a job at Breakwire, gets Calvin on his side (well, apparently) and manages to help an Aster Corp employee imprisoned in Pakistan. Meanwhile, Lucy saves a woman's life and Jake wants to go to school.

VERDICT I'm sure you'll agree that was not the most scintillating of plot synopses, but this episode doesn't really contain that much of note – aside from the revelation that Calvin has enlisted his mother to look after Amelia (she's the librarian from last week). It's still highly watchable, though, mostly down to Maria Bello's energetic performance as Lucy. She's the thing this show's needed from the very start: a convincing, gutsy female character to offset Kiefer Sutherland's gruff and earnest Martin. The fact that Jake is now more anxious to spend time with her than with his dad is also a convincing way of getting over that, “Martin needs a babysitter while he goes out and does things,” stumbling block... and this is going to get even better soon, as Jake has now enrolled in school. Now both of them can go off and do things without him (which should cut back on at least five minutes per episode of Martin saying, “Jake, stay where you are, I'll be back in a minute,” and Jake running off regardless).

We also discover that Calvin has stolen Amelia from Aster Corp and is keeping her hidden from them. So he's still evil for keeping a little girl away from her mother, but he doesn't have a multinational corporation backing him up, which is a silver lining. Saying that, he first meets Martin at a bunker filled with weapons, tells him “shooting helps me relax” and then gets him to do some target practice to prove he's a trustworthy bloke. This reeks of “crazy” to us...

By the way, we love the security system for the house Amelia is being held in: not only is there a keypad on the door, there's a fingerprint recognition pad in the actual glass!

DON'T PICK ON THE KID When Martin and Lucy are discussing whether Jake should go to school or not, she makes fun of his hairstyle. This could either be:

• A hint that young David Mazouz is about to have a makeover – he's had the same hair since episode one, so it's probably time for a change.
• An in-joke from the writers and cast about his hair that we're not privy to.
• The writers randomly making fun of his hair, which is actually rather mean of them, particularly when he's just a kid. Let's hope it's actually the first option.

BEAUTIFUL DREAMERS Ortiz doesn't appear this week except as a police sketch and in a photograph with Amelia. We do hear about a killing he committed four years beforehand, though, and find out how he got his scar – one of his victims struck back. The murdered genius in question was an astronomer who discovered a comet, keeping with Touch 's theme this year of all the gifted people doing something wonderful and worthy with their talents.

NUMBERS GAME This week's number is 1075, which turns up in a few places, including on a box belonging to Lucy and a room number at Aster Corp.

GET HER TO BUY A LOTTERY TICKET, YOU FOOL! Amelia plays a game and correctly predicts the numbers the dice will roll over and over again.

IN THE NAVY The sailor who finds out that his aunt is about to commit suicide tells Lucy: “It can take me 48 hours to get permission to leave base.” I've got no idea if this would be the case in real life or not, but surely if a family member just sent you a suicide note, you'd be given compassionate leave right away to go and stop them? Is the US Navy that heartless? Clearly the one on Touch is.

SOUNDS FAMILIAR The woman detained in Pakistan is named Mallory Kane, which also happens to be the name of Gina Carano's super-soldier in the Steven Soderbergh film Haywire . I'm not sure if that Mallory would have rolled up to a border crossing in Pakistan and sat there chatting on her phone about her dogs while surrounded by men with lots of guns. Awareness of surroundings FAIL.

FULLY EMPLOYED? Trevor at Breakwire offers Martin a job as a reporter. Laughably, he tells him: “Two pieces a month, 300 words an article.” Is that all? Don't put yourself out, Trev...

PATIENCE IS NOT HIS VIRTUE Martin goes to a house. He rings the doorbell. He says, “Dammit!” because they don't answer. Um, you might want to try waiting for more than half a nanosecond next time, Martin – generally, most people don't open the door before your finger's even left the doorbell...

BEST LINE
Lucy, staring at a photograph of Amelia's birthday party: “Why is this guy, this stranger, standing behind my daughter, six months after he killed someone just like her?”