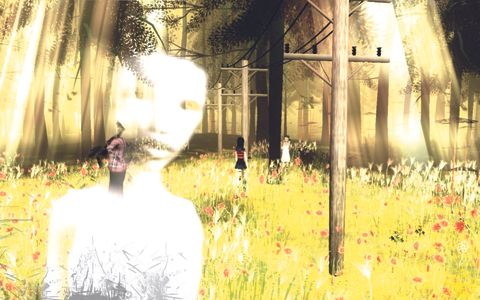 “A short horror game” is the tagline for this, one of the most peculiar commercial offerings of 2009. You take control of a series of girls of different ages, and wander a path and the surrounding woodlands. Patterns, images, and the thoughts of the girls write themselves onto the screen. Things happen. Often these are very bad things indeed. There’s not much more to it than that.

The Path is a sinister little thing that sits somewhere in the grey area between our classical understanding of adventure games, and the nebulous realm of arty expression. Without a price tag attached it might well have just been a gothic indie oddity, but the fact that Tale of Tales are asking you to pay for it means that it’s in the ring with all the other commercial games – hence this review. Given that there’s nothing else like it, rating or recommending it becomes something of a riddle. What we can say is this: if you are interested in experiencing a pessimistic, beautiful, and often disturbing little distraction that stretches the definition of ‘gaming’, this deserves your attention.

What happens in the woods is down to which girl you are in control of. The girls have different responses and fates, depending on their age and attitude. This interaction introduces one of The Path’s strongest features: letting go. The girls will only interact with things when you are no longer moving them about. Which means that you are partially helpless as to what they’re going to do. This is amplified by some monstrous magnitude when circumstances change and you enter Grandma’s house. Once inside anything you touch propels the girls forward: often towards a nightmare fate.

This isn’t a game that does anything in a straightforward fashion: its messages are cryptic, while the imagery and events are often abstract. It’s got a Lynchean ‘mystery in visual art’ thing going on, challenging you to decode its sinister motions and dark motifs. Ultimately this kind of game highlights how awkward the process of scoring interactive experiences has become. The score should not suggest to you that The Path is in some way less than a great achievement for its indie developers.

That’s not to say this is a faultless outing either. It’s agonisingly slow. It’s naive in many ways, ill-conceived in others, and occasionally implies sexual violence. Yet this is one of the most interesting things you’ll see on a PC this year, and it’s worth spending some time with if you’re able to avoid dismissing it as emo art nonsense. More artists, and more game developers, should be this brave.