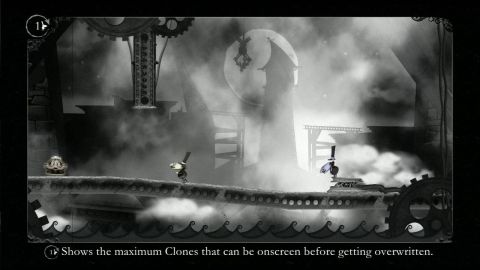 As much as we love reenacting the same male power fantasy over and over again (i.e. curb stomping aliens and blowing shit up), it’s nice to sit down and enjoy a game that’s far less heavy handed. In this indie-developed breath of fresh air, you play PB Winterbottom: the dastardly pie thief of Bakersburg. There are no genetic super soldiers or genocidal alien monsters in sight - you’re just a fat buttwit in pin-stripe pants who likes his carbs. Still, you cook up a pretty tasty little platform puzzle game, especially for fans of the time-twisting indie hit, Braid.

Specifically, like the main character in Braid, Winterbottom is an absolute natural at manipulating space and time – powers which he uses to satiate a perpetual hunger for pie. At any point, the player may record PB’s actions, which will produce clones that perform those actions in a continuous loop. Whether it be running, jumping, smacking, or stacking, each clone performs its assigned duty with admirable gusto so that the player might achieve that one unchanging, crucial goal: collect every pie.

Oddly enough, Winterbottom’s core mechanic really is its greatest strength. One would think that since Braid has already implemented a “time clone” concept, Winterbottom would be considered little more than a cheap imitation; however, the game has found so much mileage and variety in this one mechanic that it’s created an entirely fresh experience. Each collection of puzzles offers a new set of rules and conditions to collect each baked confection (rules whichwe won’t spoil for you). Difficulty and pacing progress steadily, reliably offering up puzzles that become more and more complex the further you go.

Furthermore, the clone recording system offers a degree of openness that not many puzzle games possess. Players are given a tool that provides multiple answers to any given puzzle as opposed to the usual one problem-one answer scheme found in most games of this genre. See a pie that’s just out of reach? Try smacking a clone up in the air to grab it for you or climb on top of his shoulders to grab it yourself. Say what you will, but if you can’t find enjoyment in seeing six fat little men balanced precariously on top of each other like Chinese acrobats, there’s something wrong with you straight down to the genetic level.

Above all else, this game has got some style. ImagineThe Cabinet of Dr. Caligari crossed with any Charlie Chaplin movie and you’ve got a solid idea of Winterbottom’s visual aesthetic. Designed to look like a 1920’s silent film, the game’s color palette consists of blacks, whites, and grays and is (ironically enough) absolutely beautiful.

Sadly, these striking visuals only serve to exacerbate Winterbottom’s one true issue: some incredibly bland level design. For the most part, the game limits the majority of its puzzles to tiny static screens, which (accompanied by the monochromatic look) erodes the player’s willingness to continue. Puzzle fans will finish the 3-4 hour quest for sweets hungry for more, but others may lose their appetite before the final course arrives.