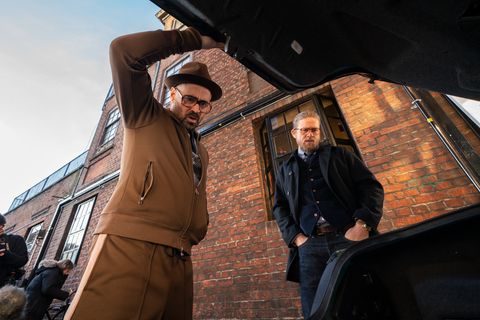 Ritchie makes a solid return to his wheelhouse with a crime yarn that turns the air so blue you can swim in it.

Believe it or not, it’s been 11 years since Guy Ritchie made RocknRolla, his last foray into the geezers, gangs and guns genre that made his name. Since then, he’s toyed with the likes of Sherlock Holmes, The Man From U.N.C.L.E., King Arthur and Aladdin, with varying degrees of success. So it’s pleasing to see him back on familiar, if well-trodden, turf with this foul-mouthed and violent tale of drug dealers, tabloid hacks and street punks.

The story hinges on a late-night visit paid to the cucumber-cool Ray (Charlie Hunnam) by private detective Fletcher (Hugh Grant), who has links to the gutter press and some serious info in his possession that he wants £20 million for. As Fletcher slugs back Ray’s expensive Scotch and eats his Wagyu beef, the story unfolds, in true Ritchie style, like the shaggiest of shaggy dog stories.

It turns out that Ray’s boss, marijuana kingpin Mickey Pearson (Matthew McConaughey) is looking to offload his highly profitable network of underground weed farms to an American buyer (Jeremy Strong). But after a raid on one of his hidden sites by a social media-savvy gang called the Toddlers,  a chain of violent recriminations is set in motion.

Among those who get involved: the Toddlers’ boxing coach (Colin Farrell); an ambitious young crook (Henry Golding), a tabloid editor (Eddie Marsan), a junkie toff (Eliot Sumner), Mickey’s own gutsy missus (Michelle Dockery)… the list goes on. This being a Guy Ritchie joint, there’s two smoking barrels worth of swearing (it might well set a world record for c-bombs in a movie) and plenty of blood splatter.

Ritchie pays homage to The Long Good Friday; bodies in freezers and even that film’s classic final scene receive passing nods. But The Gentlemen – never has a title been more ironic – is not political in nature. It’s all business, plain and simple, as these designer-dressed thugs play it tough, spitting out Ritchie’s choice nuggets (“there’s fuckery afoot”).

While McConaughey slips easily into Ritchie’s world, he’s not the stand-out. That would be Grant, whose seedy blackmailing snoop is a comic highlight (not least in the wake of the star taking on the tabloids in the Leveson inquiry). Shrugging off Ritchie’s King Arthur misfire, Hunnam also lets rip as “Raymundo”. Farrell, meanwhile, revels in returning to Intermission territory and Dockery has a ball tearing up her dainty Downton image.

No doubt some – with good reason – will baulk at the script’s more offensive elements. But when he isn’t making ears sting, Ritchie delivers a colourful, confident caper. Or as The Jam put it over the end credits: ‘That’s Entertainment’.

Ritchie makes a solid return to his wheelhouse with a crime yarn that turns the air so blue you can swim in it.