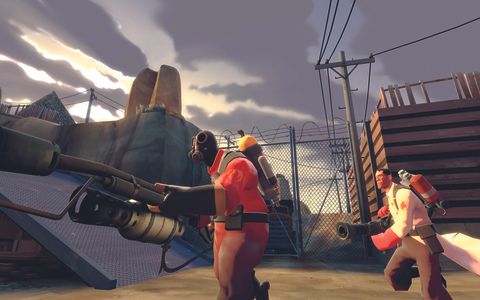 Let's not dwell too much on the original mod for Quake and Half-Life - that was ten years ago, not everyone played it, and TF2 is very obviously aimed at new players as much as old. Worth mentioning, quickly, is that it's got the same nine classes but fewer weapons for each, grenades have been removed entirely (thank God) and, well... look at it. Look what they did to it.

The changes might sound like simplification, but like the art style it's more about exaggeration. The Spy used to have a double-barrelled shotgun, for goodness' sake. Taking stuff like that out hasn't made it a simpler game, it's made the choice to be a Spy a more meaningful one. Every class is so tightly focused on doing its thing that TF2 feels like nine different games fighting each other. That's bewildering at first, but it's a joy to watch characters this beautiful smash each other to pieces while you learn.

It sounds like a small thing, to be able to tell what class someone is as surely and as clearly as you can see them at all. To have an immediate sense of the heft and power of a Heavy, rather than an abstract notion of his hitpoints. But stuff like this has an intensifying effect on your moment-to-moment experience: you feel, see and comprehend the game world in Technicolor. It makes all the relationships instantly clear and the importance of your actions explicit. In short, it makes everything you do 300% cooler.

That's Team Fortress 2: multiplayer magnified. Cooperation means more, victory is sweeter, betrayal is more bitter, defeat more humiliating. But it's what lies at the heart of multiplayer gaming that matters most, and that is, in the parlance of our times, the LOLs.