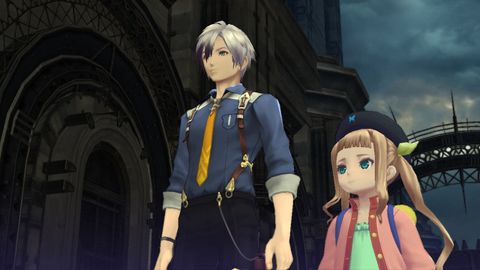 The Tales series can usually be counted on for big-eyed characters with larger-than-life personalities. Unfortunately, in the case of Tales of Xillia 2, all “larger than life” describes is the headache you’ll have after hours and hours of pointless grinding in its sprawling world. This sequel is a frustrating mixture of progress-gating and arbitrary limitations.

Even protagonist Ludger Will Kresnik can’t escape the restrictions placed upon him, as he finds himself saddled with an astronomical amount of debt to the Spirius Corporation. As you travel throughout the overworld, the debt narrative morphs into one of the many methods the game employs to ensure you're kept busy with a seemingly endless slog of chore-like missions. Initially, however, the long road to paying off your debts feels rewarding because the world map is large and teeming with treasure to pilfer and enemies to fell. Completing an abundance of quests feels organic in the beginning of the game, where you naturally earn enough cash to unlock the next area and make payments as easily as can be.

Despite a cast of largely uninspired characters, there is a light at the end of the tunnel for those who take the plunge in Tales of Xillia 2: the return of fan favorites Jude and Milla from the first game. There’s a meaty chunk of the narrative dedicated to recounting their eventual fates (especially Milla’s) so if nothing else, it’s worth checking the game out to see where they’ve ended up.

But there comes a time in Tales of Xillia 2 where you realize your debt payments continue to grow in size, while the quests and the amount of money you receive for completing them remains the same. This traps you in a loop where you must replay the same content over and over again to earn enough cash.

Even worse, Tales of Xillia 2 blatantly palette swaps areas you've already seen and tries to pass them off as new. While traveling throughout Elympios, Ludger and company occasionally explore bizarre alternate dimensions. Sounds cool on paper, but really they're just repeat dungeons with different-colored monsters and Instagram-filtered environments, reducing the game to a boring, recycled mess. This could be somewhat forgivable if the narrative itself were entertaining enough to keep you interested, but the trope-riddled story is so bloated that there isn't even much to go back to after you take care of business.

Luckily, there's plenty to like about the game's snappy combat system. Casual encounters only last a about ten seconds, making the pacing of combat feel quick and gratifying--you'll hop in and out of battle much, much quicker than you'll repay all your debts. The "Double Raid Linear Motion Battle" system is as ridiculous to say as it is entertaining to play. It affords you an abundance of freedom on the battlefield, allowing Ludger to maneuver freely as he dodges attacks and teams up with AI-controlled party members. In addition, special attacks called Link Artes--a boon when you happen to be up against multiple powerful enemies--go a long way toward adding variety to each battle.

That said, combat is rarely challenging. There's little strategy involved; just pay attention to an enemy's elemental alignments, your team's equipment, and Ludger's Weakness gauge--which transforms him into a more powerful version of himself when full--and you're all set. In fact, you can get through most encounters simply by mashing attack buttons and dodging here and there. Some boss encounters are a bit more difficult, but combat in general is a breeze.

But serviceable combat will only get you so far. Tales of Xillia 2 is a shameless attempt at stretching its assets to the breaking point. Flat characters, repetitive quests, and blatant recycling make it a Tales game you’ll want to pass up--this is one debt you definitely won’t want to repay.