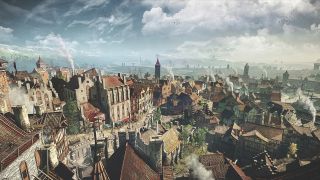 Sometimes when things get a bit much all I want in the world is to run away somewhere and get lost for a while. Unfortunately that’s really not a very good idea in real life what with all of the responsibilities and these pages not being able to write themselves. The only answer is a short weekend getaway, and since I can’t fund constant trips to lovely foreign cities, it’s up to games to save the day. Step in The Witcher 3 with its brooding hero and wind-blasted scenery, and while gallivanting around the countryside is also fun, I’m here to take in some culture and get lost in what makes the locations in this game feel so real. So it’s time to jump on your horse and ride off to Novigrad for a proper city break experience.

It’s such an impressively characterful city that I often find myself just wandering around its crowded streets for hours taking in the scenery, completely ignoring any Witcher business that I’m probably supposed to be doing. Walking these streets as Geralt is the closest you can get to visiting an old European city without having to leave the butt groove on your sofa. It’s wonderful to be able to get so lost in a place that you feel like at one point, somewhere, it actually existed.

The docks is where Novigrad is at its most natural, with hundreds of NPCs going about their day. It’s also fantastically dirty in a way that gives you a real sense of what living in the city is like. Muddy puddles line the streets, while drunks puke into the bay after too many ales. Courtesans display their ‘wares’ on street corners, and gruff men work up a sweat unloading ships.

Further into the city you’ll start to find more recreational pursuits, particularly around Hierarch Square. The narrow streets and higgledy-piggledy, red-roofed buildings open out into a large space decorated by banners and filled with stalls. Bards put on shows, while a crier might try to convince you to go to a local event. There are market stalls with tempting meats and fruit hanging from their awnings and larger shops are nestled around the edges. Of course you’ll have to get used to the smell of burning flesh – as it’s also the site of witch burnings – but that’s a small price to pay for visiting such a beautiful city.

While you’re out exploring you might bump into Witch Hunters patrolling the streets that add an unsettling presence to an area when you see them. It’s part of what makes Novigrad feel so realistic; it’s not all pretty ancient buildings and impressive bridges, there are plenty of dark corners to explore too.

The city is actually made up of two islands, with a large, covered crossway called St Gregory’s Bridge linking the two together. The bridge marks the point where the classes divide – nobles and rich townsfolk live on Temple Isle, and so the architecture shifts. The houses are grander, the streets cleaner, and gardens are dotted around for people to enjoy. It’s a stark contrast to across the water.

Winding up the hill you finally reach Elector’s square and the Temple of Eternal Fire, the highest point in the whole city and the largest temple in the entire kingdom. It’s an impressive sight, like a giant beacon that can be seen from miles away. While you can walk inside to marvel at the flame within, you can’t climb its tower. It’s the one disappointment in what is an incredible construction.

Everything about the city and how it winds its way up to its highest point is worth taking the time to appreciate. It draws you in, and soon you realise you’ll have spent six hours just roaming the streets just to see what’s around the next corner. It’s the best made city in any game I’ve played and it’s well worth a visit just so you’ve got something to compare every other video game location to.