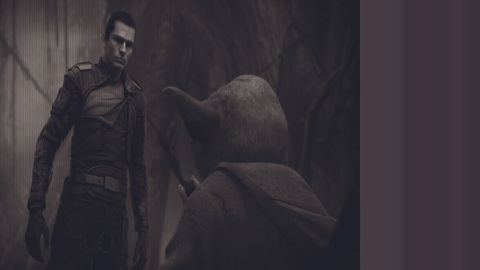 Star Wars: The Force Unleashed apparently sold seven million units. If you’re reading this review it’s likely you’re one of those seven million, and it’s also likely you had some gripes with that game, even though it was often fun, imaginative, and told a solid story. We’ll talk about the initial setup for The Force Unleashed II’s plot which addresses the ending of the first game, but beyond that there will be no spoilers. We’re going to do a detailed breakdown of all the small ways TFU II improves upon the original – we did a sort of side-by-side comparison, playing both games all the way through one after the other.

If it’s been a while since you played TFU, the improvements in the sequel may not be obvious as they are mostly subtle, but know that nearly across the board, the developers clearly took player feedback into account and tried to improve everything that didn’t quite work the first time around. First, let’s talk about what’s going on when the game begins – if you haven’t yet finished the first game, we’re going to spoil the ending so skip ahead to the next section.

At the end of the first game, Darth Vader’s secret apprentice, Starkiller, has a choice to make: get revenge on Vader and kill him (but get killed by the Emperor), or save Rahm Kota… and also get killed. The second choice, the Light Side choice, is the canon ending, meaning it’s the one TFU II uses as a launching point and which counts as true in the overall Star Wars universe. So how can we be playing Starkiller if he died in the first game?

TFU II opens with Starkiller imprisoned on Kamino, the stormy ocean planet seen in the movie Attack of the Clones, where all the clone troopers came from. Getting an idea of where this is going? Vader arrives and tells Starkiller that he’s a clone, and in fact the latest in numerous attempts to clone the secret apprentice – he’s the only one to survive more than a few days. Starkiller promptly decides, “To hell with being this asshole’s slave” and leaps out the window.

What follows is incredible, and a showcase for how TFU II is not only going for more exciting moments than the original, but also not turning those moments into exasperating tedium (pulling down the Star Destroyer). Remember the scene in TFU when Starkiller plummeted through the atmosphere and force-pushed debris out of his way? Remember thinking, “Man, why can’t I play this part?” Well now you can.

Above: Not a cutscene

In fact, TFU II contains more than one skydiving sequence and each one is just plain awesome. The key here, unlike what they did with the Star Destroyer pulling scene in the first game, is that these sequences aren’t difficult or unintuitive. The game tells you that you can Force Push obstructions out of your way as you fall. Great, but what happens if we want to use Force Lighting? Oh, wait, we can do that too. Did we just blow up a tie fighter with lighting, in mid air, as we were plunging past it? Sweeeeet.

Watching the cutscenes in TFU II might inspire the reaction of “Hey, these faces look really good.” Try going back to the first game, though, and the massive improvement becomes clear. The character models in TFU actually look awful – the faces are blurry, the lips move in really weird ways when the people talk, and for some reason they all look like they have cataracts. It’s like a Star Wars universe populated by zombie versions of themselves, or maybe old people with great plastic surgery. In TFU II they don’t have thosebizarre watery eyes and although Starkiller’s mouth looks weird when he talks, we think that’s just because he has a weird mouth. Otherwise, everything looks great during cutscenes, and in most games this wouldn’t be important, but this now-franchise is built upon its storytelling strengths, so with better looking people and more realistic expressions, the story comes that much more alive.

Strangely, the much-touted DMM tech, which allowed wood and glass to splinter realistically in TFU, is essentially absent in TFU II. We honestly didn’t miss it much, but going back to the original and seeing objects shatter into jagged pieces looks extra cool by comparison. TFU II claims to still use DMM, but hell if we could tell. Still, the game looks fantastic, and has a more solid look to it, feeling more finalized and certainly less buggy than the original.

For instance, the rain on Kamino, rippling down every surface, is engrossing just to stop and watch for a few seconds:

Above: Wait a minute... is that stormtrooper trying to do a running headbutt?

Another particularly beautiful and imaginative aesthetic is the design of the cities on Cato Neimoidia, which are constructed as upside-down buildings hanging from the underside of gigantic arches:

Above: Hey, that's cool, we didn't notice the natural stone arches before. A hint that the Neimoidians built their cities through inspiration from the environment? Cool...

We should note, however, that the variety of locales is actually diminished from TFU. Both games recycle some locations, but in TFU II it feels more for the purpose of story rather than a cheap way to reuse resources. The actual architecture of the levels, like the first game, is rather uninteresting – it all looks pretty, but the shapes of the spaces mostly boils down to rooms connected by catwalks and hallways. They are lovely looking catwalks and hallways though.