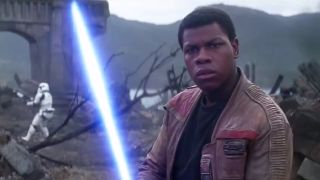 We’ve not even got a name for Star Wars 8 yet, but that hasn’t stopped news coming out about Star Wars 9’s upcoming production schedule.

Casting website Project Casting are reporting that Star Wars 9 will return to the iconic Pinewood Studios in England in April next year, despite not being scheduled for release until May 23, 2019. The extra time compared to the productions for The Force Awakens and Star Wars 8 hints at an epic conclusion to the new trilogy, as does the move towards a new filming format.

Jurassic World director Colin Trevorrow is taking on a Death Star-sized task by both directing and writing Star Wars 9 but he’s also shifting the Star Wars franchise towards 65mm film. To compare, 35mm film was used to shoot The Force Awakens and Star Wars 7. Could we be seeing an even more beautiful galaxy far, far away?

Rian Johnson finished production for Star Wars 8 in July. It may be that Rian shot first, but, with the earlier production time, Colin Trevorrow is looking to top the lot.