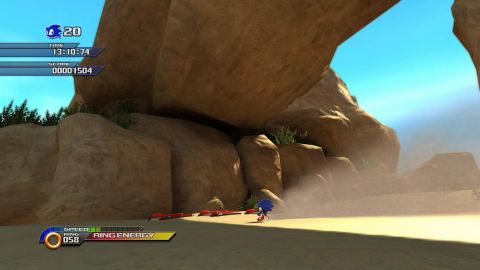 There was a time, perhaps a year ago, when we were seriously excited about Sonic Unleashed’s retro-platform action. The sense of sheer velocity was breathtaking as Sonic blasted through admirably detailed levels so quickly that the soles of his shoes should have melted off. The camera smartly alternated between a dead-on side view and a legitimately usable over-the shoulder view, and there was neither a huge cast of useless and annoying sidekicks, nor fishing, nor pet raising, nor kissing human girls, nor even any evil/anti-hero hedgehogs toting twin pistols or levitating around chucking cars with their minds. It was just Sonic. Running. And it looked wonderful.

Then we found out about the “Werehog” levels. And hope died.

And unfortunately, both our worst fears and our most hopeful dreams have been realized. Once again publisher Sega has somehow completely ignored all that made Sonic great – that would be the super-fast running – and added yet another needless bunch of crap.

It’s extra painful with Sonic Unleashed because the skeleton of this game is fantastic. The levels in which you’re rocketing along as Sonic, exploring the levels at a pace that would make your eyes water and your cheeks flap like you were in a wind tunnel, are an absolute joy. It’s all here, too: Loops, the rail-grinding, the spin attacking, the gold rings. There are even new ideas, such as a drift-like skid and a quick dodge. If the whole game was like this, we’d be looking at a legendary return to form for one of gaming’s most iconic characters.

But then you get dragged back to the werehog levels, which take up way more time than the running segments. When night falls, a newly lycanthropic Sonic gets even furrier, grows Hulk-like muscles, and gains the inexplicable ability to stretch his arms as if they’re made of elastic. We know this is a game about a talking, shoe-wearing, blue hedgehog, but seriously… what the hell?