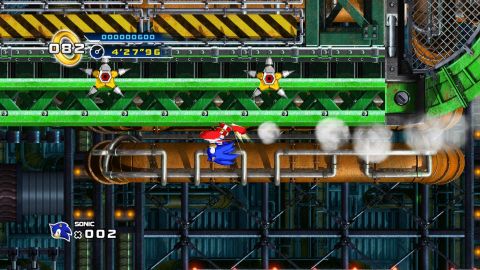 When you've been regularly playing the same game for 19 years, you're going to notice any differences in a new sequel. And I'll be the first to admit that I threw all my toys out of the pram when I saw the first footage of Sonic 4. The physics are different, the art design is different… perhaps it was just too different to be worthy of the name 'Sonic 4'. How could anything possibly live up to that name? To my utmost surprise, it does.

Initial impressions from the first few seconds of play were exactly the same. Toys, pram... it wasn't pretty. The screen looks ultra-clean, Sonic's animation is better than it was in that early build but still not incredible, and the physics are... different. But after the shaking stopped and the fear of change subsided, I started to have fun. A lot of fun.

Above: Why is Sonic running in and out of the screen on a levitating pathway of playing cards? Cos he can

Sonic 4 is a joyous game. It has four main levels, set in familiarly-themed locations. There's the Emerald Hill-alike Splash Hill, Casino Night-alike Casino Street, Labyrinth throwback Lost Labyrinth and finally Mad Gear, which is like Metropolis zone from Sonic 2, only slightly more forgiving. It's no secret that there's a secret E.G.G. Station zone too, which contains one of the biggest fan-pleasing moments of recent years, but I'll let you discover that one for yourself.

Above: The map screen manages to make it look like day and night can co-exist. That's next-gen

The game plays like no other Sonic game. While it borrows the vast majority of its level furniture from the first three 16-bit classics, the feel is very different. You can immediately spot DIMPS' involvement, as there's a fair smattering of Sonic Rush's characteristics. The acceleration over flat land, the movement over hills… but that game's trick system has been almost completely stripped away, making this the purest Sonic game since Sonic Advance 1 on GBA.

You get the lock-on attack from Sonic Adventure, which threatens to change the game too much, but is actually used sparingly and works well almost all of the time. There are a couple of occasions where you want to use the air dash to power over a spiked enemy's head, but the game thinks you want to attack it, resulting in a cascade of lost rings.

Above: The target lock is forgiving and lets you reach otherwise-inaccessible areas at the top of the levels

You'll want the rings too, as the familiar-looking bonus stages from Sonic 1 return. I've explained before about the way you have to rotate the maze (now not on Sixaxis tilt control, though the iPhone version retains it) and get enough rings to unlock gates within a strict time limit. I'm a big fan of the new special stages as they're absolutely hardcore, and getting all seven emeralds comes with a wonderful sense of achievement.

Above: The final special stage requires 99 rings in 90 seconds. You can get more time, but it'scrazy hard

Going back to Sonic 1 after spending hours with its new sibling feels very strange. Sonic 4 handles very differently. It's more… bold. Clinical, even. Every movement seems more deliberate, and while the finer nuances of low-speed control have arguably been lost, it's at high speed that it reveals its true depths.

I mentioned that lock on attack can be used as a simple air boost. When running at speed, this has a noticeable acceleration effect, allowing you to reach speeds on open stretches that old Sonic simply wouldn't be able to do without a hill to help him. Jumps on hills still react as you'd expect, and landing a jump on a decline results in a welcome burst of speed, just like those loop-jumps of Sonic 2.

Above: Learn the physics and you can start speed-running levels. This isn't a bad time to kick things off...

The game was called 'Project Needlemouse' in its early days, a clear indication that this was meant to be what the team would have done with Sonic 1, had today's tech been available at the time. While it's clearly been held back by its multiplatform compatibility (and I still maintain thatrecent fan videoslook more impressive from an observer's point of view), the game gets some crucial things that fans wanted absolutely right.

For instance, Sonic is mute. He doesn't even say 'Yeah, not bad' at the end of an act, which I actually started to miss. Also, the badniks are faithful to their original designs – none of that crappy humanoid robot stuff here. Just Newtrons, Moto-bugs and Asterons. Mario's always had his Goombas, so it's great to see the old-schoolenemies back in a Sonic game.

Above: "So, Sonic - we meet again. You can have this invincibility item, but you'll have to get through me first"

The soundtrack can grate just a little bit when you're restarting stages continuously for time trial, which I wouldn't say is true of the old games, but the mix of straight-lifted Mega Drive effects and high-quality 2010 MIDI works a treat. The new musicshares tempos and musical styles with the old themes too, all adding to the feeling that this is a celebration of the old, just delivered in thehigher fidelity of the new.

Do you want to live forever?

There is one concern, however. The game simply haemorrhages extra lives. The Casino zone in particular gives you so many bonus lives for doing nought but push forwards means you'll hit 100 spare Sonics in about two hours' play. Sure, Sonic newbies will have more of a struggle, but I doubt many regular gamers will ever see the Game Over screen… if indeed there is one.

So how much game is there for Sonic experts? I was able to beat the entire game, collected all the emeralds and beat the secret zone in one evening. After that, there are separate score and time attack modes to try for every stage, complete with online leaderboards.These aresplit into all/friends categories, and scores attained with Super Sonic are categorised separately from regular Sonic.

Add in the countless hidden routes through levels and it's clear there's a truck-load of replayability.Finding the fastest routes and mastering them is going to take weeks, maybe months. Maybe years.

Above: Wait a minute... rings don't go through walls! I sense a secret room... oh, I've been squashed

The Episode 1 subtitleand single evening completionsuggests it's a short game. But it's probably as long as Sonic 1, with more routes to find and just as many reasons to come back. Plus not everyone will want to blaze through it. You may still look at the score and the phrase 'single evening' and wonder how on Earth the two go together. But they do. Seeing the end sequence is only the beginning. The game's greatest achievement is making the levels fun both the first time you play them and the hundredth (yep, I was up gone midnight playing Time Attack). It's classic Sonic.

In fact, 'classic Sonic' sums up the game quite nicely. It's got everything the original stood for, from speed to careful platforming, varied routes to secret rooms. While it isn't asbrazenly spectacular as I'd hoped it would be, some of the 3D backgrounds are really rather beautiful, and you soon appreciate the detail in the HD foregrounds. It's also rock solid – the extra development time has made this the slickest Sonic game I've seen since Sonic & Knuckles and Sonic's movement is reliable and measured. Perhaps too measured for some fans, but it's converted me.

Above: Sonic 4 may not make the most of the hardware's potential, but that background is beautiful, deep3D

A friend on Facebook asked me to sum up the game in one word. It's a tough thing to do. I wouldn't say 'magnificent' – it's still a little too unambitious for that. I certainly wouldn't say 'disappointing', because Sonic Team and DIMPS have done the impossible and managed to make this most critical of Sonic fans love a new Sonic game.

So I'm going to plump for 'deserving'. And I mean that in two ways. It's deserving of your time and your money despite its length. But more importantly, it's deserving of the name 'Sonic The Hedgehog 4'. That was always going to be this game's biggest challenge, but it's succeeded with aplomb.

Justin Towell
Justin worked on the GamesRadar+ staff for 10 whole years. Imagine that. Now he is a contributor, specialising in racing games, retro, and Sanic.
See comments
Gaming deals, prizes and latest news