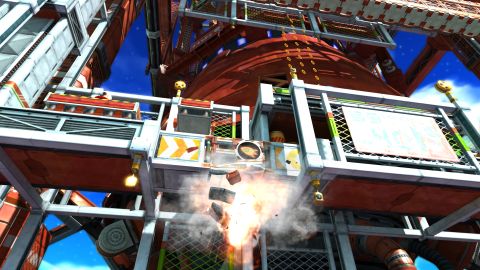 Sonic fans are the hardest bunch to please in all of gaming. If Generations still makes you sad, despite the speed, spectacle, beauty and fan-service, I suggest forgetting all about 3D Sonic games and sticking to the 16-bit originals. As we revealed (and I couldn't tell you at preview stage), the original Sonic The Hedgehog is in the game, unlockable after about an hour's play if you save up your points for a Mega Drive controller. You don't get anything for completing it, but it's still a great game.

Above: You can't lose the borders. But you can play in 1:1 pixel ratio by hitting L1. It's tiny

But when you put the past to one side and look at the new game in isolation, there are essentially two games on show here - and I don't mean the classic/modern divide. The first is the one that stumbles on the things that Mario does so well. The attractive yet haphazard experience ridden with missed platforms, unexpected deaths and awkward low-speed movement in 3D space.

Then there's the other game. The one that's cruising by on the grind rail above it all, pulling tricks through bonus hoops with stars in its wake, locking onto secret ziplines and waiting for the split second where Sonic completes an aerial somersault to face the next platform before boosting away for another S grade. The one that's everything fans have wanted for so long. You can guess which one I've been playing.

Above: Look, it's Show-off the Hedgehog! Pushing L+R in the air pulls the Sonic Adventure pose

The finesse and subtlety of the moveset reward practice and close attention. So once you're past clumsily tripping up on low-speed hazards (which won't take long), the game flows like water.

Sonic Team once complained that the action stages take too long to develop because all that painstakingly-rendered scenery flashes by in seconds. That's why the Werehog was put into Sonic Unleashed – to slow it down and pad it out. Well, looking back through my save file, totting up my times for finishing the main levels (excluding challenges and even boss fights), there's over 80 minutes of non-repeating, 'premium' gameplay in here. That's longer than any of the old games take to finish and it's 50 times more spectacular. Not to mention I've been caning the game for a couple of weeks now and I'm still not bored with any of the main stages.

Above: You won't find a more thorough review of Sonic Generations anywhere. Fact

To be honest, if the main stages were all the game had to offer, I'd be happier with it. But the game has literally talked itself out of a '9' from me, as the side challenges rely too heavily on the weakest aspects of the game. You could ask 'how can extra content bring the score down?', but there are hours and hours of these things – some of which are compulsory. And when you have to play them to unlock the best skills, you can't just pretend they're not there. They are there, and they're 7/10 stuff. Still addictive and entertaining (and incredibly challenging if you insist on getting an S grade in every one), but mechanically dubious.

If Sonic Team had just spent their time on tightening up the low-speed control in the main levels rather than churning out some 90 levels of 'filler' content, this would be magnificent. As it is, it's 'merely' the best Sonic game since Sonic 2. That means it's better than Sonic 3, and therefore damn essential for anyone with even the slightest interest in the hog.

Is it better than…

Sonic's Ultimate Genesis Collection? Yes. Even though the 16-bit retro-fest has just as much nostalgia and contains all three classic original Sonic games, Generations brings the retro love into the modern era with an incredible realisation of the old-school worlds. By all means, play through the originals to get in the mood for the new game, but it's time to accept gaming has moved on.

RTFA! Sorry, what I actually mean is: This is easily the best Sonic game since the hog's Sonic 2 glory days. Surprisingly, modern Sonic's levels are the more impressive and fun and, while low-speed control is still clumsy, the wealth of quality action scenes cherry-picked from the past two decades make the overwhelming majority of Sonic Generations an absolute blast.