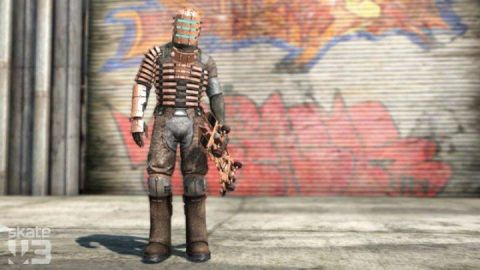 This review comes from UK magazine PSM3, which for UK readers can be foundherefor this single issue, orherefor a subscription.

Above: This issue also talks about some other games, if you couldn't tell

Evolution? Or iteration? With barely a year between this and Skate 2, EA’s latest isn’t as familiar as you’d fear; nor the revolution its myriad tweaks briefly threaten. What it is, is rarely crafted, tweaked in synchrony with fan feedback and afully-online single-player game – and a promising, if slightly worrying, portent for all games to come.

Sign in to EA Nation, and every game of Skate 3 starts in an online lobby; updating your achievements, your ‘brand’ status, how many friends are online and – sigh – how many people have crushed your scores. You can instantly skip the lobby into the solo game, but Skate 3 wants – almost forces – you to feel part of a community. You can tackle any solo-objective with real-life friends – so call a pal in if you’re stuck – or team-up and take on other skaters in familiar modes like Death Race, 1-Up, Domination, Street Contests and Hall of Meat Battle.

The game’s core objective – if, indeed, there is one – is to build a skateboard brand by completing tasks to sell ‘boards’ (like points), enlisting new team members, unlocking team HQs and endless licensed gear. Hit a board sales milestone (say 100,000) and you recruit a new team member, whom you can design from scratch, and skate with online, and off. In turn, this unlocks team-based objectives, where you film or take photos of your pal to appear in banners dotted around the world. ‘Own’ a spot – by nailing the top score on it – and your user-designed team logo ‘brands’ it like a tattoo for all to see. Well, until someone else crushes it.

Sadly, in single-player, there’s little fun to be had skating with AI ‘pals’, and team objectives are too fiddly – you need to manually place a tripod, take control of your buddy using right stick tricks, and tap the shoulder buttons at the exact moment to take a photo. It’s not an issue with real-life pals, mind, and the scope for creativity is immense. You could, in theory, head to the huge, yawning chasms of the quarry, use the Object Dropper to build a 100ft rail, grind it in formation with a team of real-life online friends; all wearing user-designed T-shirts and decks, and decorate the game world with the resulting photo.

Skate 3’s boggling freedom of choice is where our political parable begins. As enticing as ‘empowerment’ sounds – the ability to skate anywhere, with anyone, creating your own shirt designs and skate parks – some of us simply need the structures of the nanny state. In other words, we need the game to make some decisions for us. The result of all this freedom is that the single-player is largely incoherent, and – bar board sales – you don’t feel like you’re making significant progress.

Skate 2’s initially narrow set of objectives unlock hierarchically, so everyone enjoys a similar experience, learning at the same pace. Skate 3 starts with an all-embracing Skate School (pros can skip it), but after the first few objectives, you’re left to attack them in any order you wish – and unlike Skate 2, it feels like they’re all open at once. At any time, you’ll have, say, 14 Team Challenges, 6 Death Races, 17 Hall of Meat, 5 Street Contests… and many more tasks to do.

You’ve no idea if tasks are easy or hard, and the freedom erodes any notion of linear narrative, or the reassuring progression that comes from slowly tackling tougher tasks. Even when you nail a glut of tasks, it’s like hacking at a hydra that grows new heads. Don’t be misled – the tasks are fun, if familiar, with the usual competitions, film, photo and pro challenges, plus Death Races on thrilling, near-vertical terrain, like the underground sewer. Sadly, for Skate veterans, the familiarity irks, and even having nailed 61 tasks, we’re struggling to remember highlights.