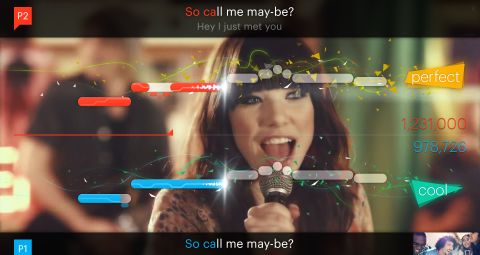 If your idea of the ultimate party involves cubed cheese and chunks of pineapple on cocktail sticks, a non-alcoholic fruit punch that doesn’t even have the decency to tick off one of your 5-a-day, and a guest list that includes Great Uncle Marvin and his long lost wife Dolores (a.k.a Great Uncle Marvin’s new umbrella), then the latest addition to the SingStar franchise should be right up your alley.

SingStar: Ultimate Party is the self-proclaimed pinnacle of any SingStar party you’ve experienced to date, but in a spectacular display of ultimate irony, it fails to deliver in the most basic of areas. To kick things off, there’s the track list. Previous disc-based iterations present you with a library of 30 songs spanning the decades, from enduring hits, and classics so cheesy you’d need a bunch of grapes and a box of crackers to get through them, to contemporary chart toppers that only the teens and tweens would know the lyrics to. And you, when there’s no one else around to witness the fact.

The variety of the tracks on the SingStar: Ultimate Party disc is about as diverse as the sugary sweet Disney offcuts and waistcoat-festooned artists themselves. Gone are the guitar heavy jams that cajole those ‘just watching’ to join in from their seats, and oldies-but-goodies that almost everyone is acquainted with. Now it’s a trite selection that will be more prone to alienating a large proportion of SingStar’s eclectic fanbase rather than catering to them. Even the hugely popular ‘Let it Go’, sure to entice any karaoke fiend, is Demi Levato’s cover rather than Idina Menzel’s original rendition. You can view the full list of songs over on the PlayStation blog.

Of course you can head to the store and create a pick and mix tracklist to please everyone at £1.15 a pop, but if you’re billing a 30-track disc as the hottest playlist £20 can buy, it would be wise not to stuff it with generic bollocks persistently teabagging your guests until they finally peel themselves off from the scrotal skin that your party has devolved into and leave.

All those streaming fans

You can share your SingStar: Ultimate Party session by uploading it to the PlayStation community, Facebook, and Twitter, using the PS4 camera to create all sorts of effects - from AR masks to filters - to liven up your video. Or you can just head over to the online community and watch other people belt out songs in their living rooms while you silently judge them from the comfort of yours.

The saving grace is that you can transfer songs over from your PS3 library for free, but this gesture soon becomes sullied when you realise that the songs you own have to be present in the PS4 PSN catalogue, and considering the size of the online library and lack of updates in recent months, the length of time for a full PS3 to PS4 transfer of your existing SingStar content is anybody’s guess. So if you’ve forked over a load of cash for a bunch of songs that aren’t in the store yet, tough beans.

And forget about using the discs from the older consoles; this gen, there’s no workaround in sight that will let you pop in a master disc and swap it out for other SingStar titles, so that’s another chunk of your collection gouged out and tossed onto the “Oh bugger” heap, along with all of the moolah you’ve invested in the franchise over the years so far.

But the biggest kick in the teeth is the fact that all of the party features have been unceremoniously stripped away. Everything that made SingStar a party affair has vanished; Pass the Mic, Duets, Medleys - even the difficulty settings - they’ve all been dumped in favour of a basic 1 to 2-player singalong. Online Battle Mode is a relic of the past as well, and the feature has been retroactively patched out from the free PS3 app in case you had any funny ideas about trying to actually engage with other human beings and have a bit of a laugh. I don’t know what the twenty-somethings draped over one another in the fancy new menus are doing, but judging by the absence of party based musical antics, I’ll tell you what - it’s not singing.

You can still salvage the party with a handful of decent songs and enough beers, right? You don’t need a bit of software to teach you the meaning of sharing. You poor, sweet, optimistic bastard. The mics are barely functional. Crank the volume up on the d-pad all you like, no one will hear your caterwauling, and isn’t that the whole point of karaoke?

If you don’t have a mic, you can download the free app on your smartphone that will connect to your active SingStar game and turn it into an additional peripheral, and you’ll be pleased to know that it works just as well as the USB counterparts - you still won’t be able to bloody well hear anything. But in relative terms, it’s a free alternative that functions on par with the branded hardware, so that at least is a bit of a money saver. I downloaded the app on my Samsung Galaxy Note 3 and experienced no lag or issues other than mic volume, but your mileage may vary.

With a disappointing playlist that struggles to venture beyond the confines of a single genre, the nonexistence of any multiplayer modes, and the barely functioning peripherals, you’d be wise to give the newest entry in the SingStar franchise a miss. You’d be better off whipping out your iPod, queueing up your favourite playlist and handing out the hair brushes instead, for a karaoke experience that actually delivers on the promise of an ‘ultimate party’.