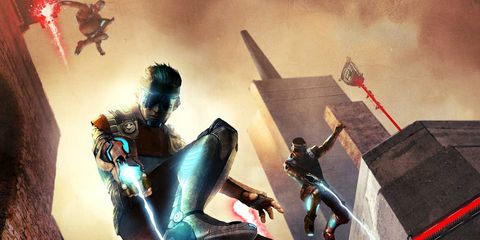 ShootMania Storm is a trip back to a time when competitive first-person shooters were simply about hunting down your opponents and making sure you didn’t get shot. There are no guns to choose from, no ammo to worry about, and no cover controls to learn. Instead, what you get is a barebones shooter that rewards skill and technique without any of the frills that we’re used to from the more popular FPS titles out there.

One of the most important things that makes ShootMania stand out from today’s shooters is that it focuses on accuracy over damage. Two shots anywhere is all it takes for you to get killed, so you’ll need to master the game’s simple controls of jumping and shooting to evade fire and take down your opponents. These controls are simple enough for FPS beginners to enjoy, but mastering the technique of leading a shot is key to scoring kills.

Matches themselves are quick to get into, thanks to the various familiar modes the game offers. After navigating your way through some confusing menus, you can choose from the game’s pre-created modes, most of which offer variations on free-for-all, team, and King of the Hill-type matches. One ingenious mode in particular features a cyclone that slowly makes its way to the center of the battlefield, forcing players closer together for chaotic sudden death shootouts.

ShootMania takes a novel, if simplistic, approach to weaponry, as it supplies everyone with the same energy gun that fires four shots before it needs to recharge. That means no interchangeable rocket launchers, sniper rifles, shotguns or other standard FPS fare. Not only does this put everyone on the same playing field, but you won’t have to worry about picking the right weapon for a specific situation. Some maps do offer special zones where your weapon magically transforms into a rocket launcher or a sniper, but these areas seem unneeded as they leave you vulnerable. You’re better off with your default weapon, even if shooting the same bullets tends to get old after a while.

For better and worse, the game also doesn’t offer a leveling system. In the hands of skilled players, some matches can culminate in tense stand-offs between two opponents strafing back and forth, hoping to anticipate their opponent’s moves and land that last shot. However, you’ll likely start to feel like the game doesn’t offer anything more than what it comes with. Winning matches simply increases your global and local leaderboard rankings, but victories don’t offer anything else that makes you feel like you’re making progress. You’re not playing for experience points, unlockables, or new weapons, so despite having accessible controls and mechanics, ShootMania actually feels like a game tailored to competitive players that are satisfied with just winning. Those who don't live for the sheer thrill of victory might find themselves wanting more.

To remedy this, Nadeo also supplied the game with an impressive level editor that lets you design your own battlefields and decide what rules to give your matches. Offering a basic and advanced level creator, the editor includes all of the components from the core game, and it lets you test out your levels and rules before creating them and sharing them with the world. You may not be making any progress, but designing your own maps and inviting some friends over for frantic battles with rules you created is a rewarding experience that not many modern FPS games offer. When it comes down to it, much of ShootMania’s replayability lies in the hands of its community and the variety of inventive stages you’ll encounter on its servers--and so far, there are plenty of creative modes to explore.

As fun as it is to create your own worlds, the levels you’ll play through and create repeat the same generic visuals that make the game feel stale after playing through them dozens of rounds in a row. Even the default stages are easily forgettable, and don’t provide any sense of wonder or context as to what world your vapid avatars inhabit. The strange soundtrack that loops in the background is also uninspiring and doesn’t match the action on the battlefield, sounding more like futuristic menu music than something you’d expect from a match to the death.

Despite its bland and overly simplistic exterior, ShootMania Storm is like a blank canvas for FPS fans' creativity. Players who miss the days of Unreal Tournament matches will appreciate the game’s simple and uncomplicated gameplay, but those looking for more than basic victories should look elsewhere. It’s not a game everyone will appreciate, but priced at $20, those who want a classic, fast-paced competitive shooter should pick this one up.