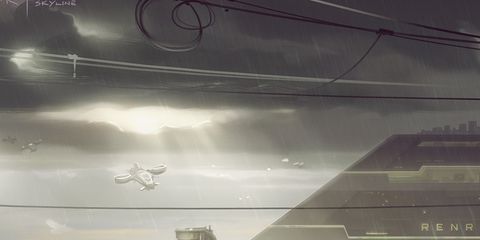 Shadowrun Returns is a journey back to the futuristic world of a franchise that started out as a pen-and-paper RPG. Both a reboot and a tribute to the series’ video game roots, Shadowrun Returns features all the classic cyberpunk themes, text-heavy gameplay, and turn-based combat system fans of the series have missed, and a world rich with character and personality that new players will enjoy. Though it’s not without its flaws, Shadowrun Returns does an impressive job of rekindling the fire of a series that seemed lost since the 16-bit era.

Like its predecessor, Shadowrun is a story-driven game, told through the conversations you have with characters and your interactions with the environment. Set in a futuristic vision of Seattle, it puts you in the shoes of a shadowrunner, a mercenary of sorts, who needs to track down leads to discover the culprits responsible for his friend’s death. While the world is big and features plenty of people to talk to and clues to interact with, the main campaign is relatively short, and doesn’t make the most of the rich world it inhabits. You’ll be introduced to so much lore, history, and even slang that it’s a shame the plot ends before you get the opportunity to delve deeper into what makes it all tick.

Shadowrun features plenty of races and character classes, which shape your overall experience as they give you plenty of choices to play how you want; they all come with their own set of abilities, weapons, and stats. You can select long-ranged mages, for example, cybernetic soldiers that can hack into systems, or summoners that can call on spirits into battle. Regardless of their class, characters can also have distinct personalities that can affect a conversation and open up more choices when clearing a mission. The game itself is quite linear, so it’s great that you have control over how you play and over some of the more critical decisions in the story.

Missions you complete grant karma points that are used to further enhance your character’s skills and attributes. Though it may seem daunting at first, the leveling system is fun to play around with once you understand its concepts; it offers several avenues for customization without overwhelming you with too many options.

Battles, too, are pretty straightforward, featuring accessible turn-based commands. Your character has a limited number of Action Points to use during each turn; once everyone on your team has finished theirs, the enemy attacks. You’ll enter most battles with one or two allies under your control, so you’ll usually have backup against the more formidable opponents. Most of the later encounters require some planning and thinking, as obstacles--and even your own teammates--can ruin your chances of landing a shot. With so many different classes in the game, getting to know how an enemy attacks and how much damage an attack can have on your character can prove challenging. But, for the most part, combat doesn't pose a real threat, and it's a welcomed departure from the calmer, more methodical exploratory sections.

Though you may not die often in Shadowrun Returns, the lack of a manual save system makes restarting a mission extremely frustrating. You’ll lose minutes or even hours of progress if you’re not careful, and since you can only save when the game dictates, you won’t be able to experiment or spend time exploring outside the game’s main objective without the risk of dying and losing your progress. For a game that encourages exploration and customization, its auto-save feature feels backwards and intrusive.

Lasting about 8 hours, Shadowrun Returns isn’t a very long game, and it’s a shame that it ends when you’re so engrossed in the world you’ve just explored. Additional content is planned, but players can also create their own levels and chapters using a complex level creation tool. This is an appreciated nod to the traditional pen-and-paper RPG that the series started out as, giving players the ability to become game developers and create their own levels. Like all user-created content, it’ll be interesting to see how far Shadowrun Returns goes beyond its main story, and how far the community decides to take it.

It’s been awhile since the last traditional Shadowrun experience, so it’s great to see this one bring back the classic feel of the series and updates it to fit this generation. It may not last long and it may have issues with its save feature, but the time spent adventuring in this futuristic vision of Seattle will be well worth any frustrations you may encounter. If you’re looking for an engaging throwback to a classic that features a great story, missions, and a fun combat system, Shadowrun Returns won’t disappoint.