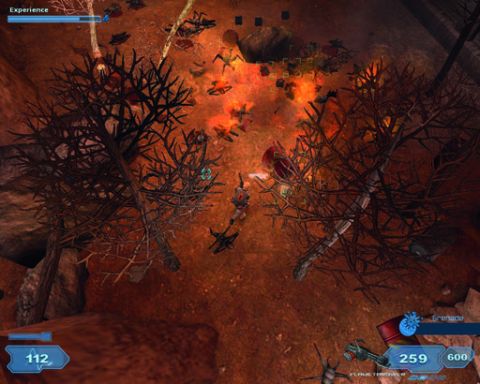 The very mention of the words “space” and “shooter” can often make the average games journalist imagine numbers below 2 while he thumbs through a thesaurus for words like “awful.” The kicker is occasionally we get blindsided by a game that’s good, and we have to take a few minutes to still our hearts.

Shadowgrounds Survivor, which can only be purchased and downloaded through Steam, is the sequel to a distinctly average nearly top-down shooter, and follows on the utterly forgettable storyline from where the original left off. Here, let us retell it - shooty angry aliens attack poor humans on a far off colony and you shoot them back because you have guns.

The big difference is the atmosphere. Survivor has a completely different look, with gorgeous, slick movement, great physics and some remarkably fine ambient light. Your flashlight beam bends and moves around boxes, morphing through wire grates and making huge, ominous shadows behind your enemies. Control-wise, movement is the essence of simplicity and fits perfectly with the constant, frantic action. It never lets up, leaving you tense and twitchy in the few-second lulls of fixing terminals and the fleeting conversations with the survivors.