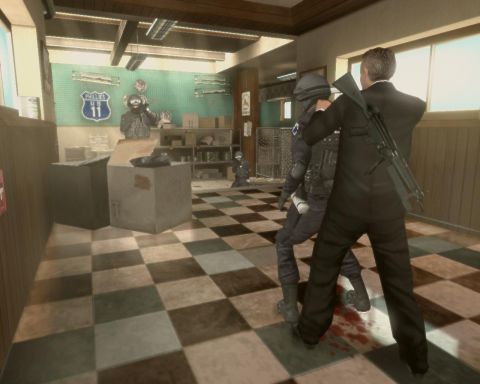 Before we start talking about Reservoir Dogs, there are a few things you should know. First, you won't saw the ears off any cops - at least not on camera. Second, the game isn't a Grand Theft Auto clone. Third, of all the actors whose careers were jump-started by the iconic 1992 crime flick, only Michael Madsen (Mr. Blonde) appears in the game. And fourth, you can't just shoot undercover cop Mr. Orange at the beginning to win the game.

Rather than straight-up adapting the film about career criminals in the violent aftermath of a botched diamond heist, Reservoir Dogs fills in the missing pieces from the movie's narrative. Playing as each of the main characters in turn, you'll plow through linear shooting and driving levels that reveal how the criminals escaped the heist, how they stashed and recovered the diamonds and how at least two of them died.

To its credit, the game nails the spirit of the movie. The catchy '70s soundtrack is all there, and while the characters look only vaguely like their movie counterparts, the sound-alike actors turn in a solid performance. The in-game banter isn't half-bad, either; what isn't lifted directly from the movie actually sounds like something Tarantino would write. There are some interesting flourishes, too; our personal favorite is a level where you have to drive a car as the head-shot Mr. Brown, and as you slowly bleed to death, splashes of blood and a red corona slowly cover the screen.