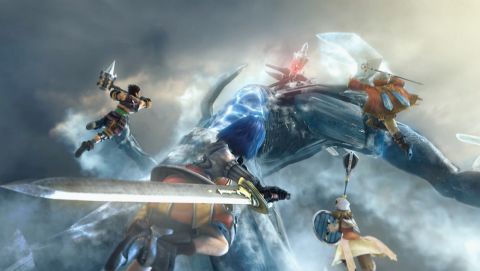 Ragnarok Odyssey Ace isn’t that bad, really. Odd way to launch into a review, but it’s worth noting since the Ragnarok franchise has never been a particularly popular or well-received one this side of Japan. While Ragnarok Odyssey Ace isn't likely to change that fact, it is a superior version of 2012's Ragnarok Odyssey, aiming to bring the universe of the popular Ragnarok Online MMO to the PS3 and Vita. Sadly, it tries so hard to replicate its forebear that it fails to play to the strengths of the systems its been remade for. So what I'm saying here is, not great--not bad, but not great.

Sticking to its roots, the heart of Ace lies in character customization, for better or for worse. Those who enjoyed the original Ragnarok Odyssey or Ragnarok Online MMO won’t be disappointed, as everything from your character’s job class to the shape of his or her nose is yours to toy with as your fickle heart desires. That gives even the most indecisive players the freedom to play the way they want--you can smash through monsters all day long, up your defense stats to play the cleric, or start with one style and move to another, all with equal ease. Ace then plops your character into a series of missions loosely connected by a “save the humans from a new and mighty threat" story, but there’s never a question what the real point is: you building your character up through quest and combat. And the world exists to help you do that.

That single-minded focus can work for MMOs, where character-building and social interaction are pillars of the genre, but it makes for a hamstrung single-player experience. In Ace’s case, the flimsy plot alone isn’t enough to hold the missions together, and there's no real sense of accomplishment or weight when you complete one. The best you can expect to get is a fist pump from your character before you’re ported back to the game hub and sent off on another equally frivolous romp. Again, it can work in an MMO for missions to be this simple, when you play to create a character and interact with those around you. However, in making the jump to single-player, Ace failed to notice it left half of that equation behind. As a result, the game spends so much time thinking about character creation that it forgets to add substance to the tasks those characters are supposed to take on. Sure, it’s fun being able to color-coordinate your thousand-pound hammerdrill and hair bow, but once you step out of the changing room the game really has to offer something more.

Ace’s gameplay helps a little in this regard, but it’s also undercut by the same dullness that plagues the plot. At first, figuring out the best way to combine your different attacks is a lot of fun as you watch enemies fall before your superior might, and it gets more engaging as new options to obliterate them open up. Sadly, that doesn't last long, because after a while it becomes obvious that the exact same strategy can be used to defeat every enemy: dodge, dodge, smack it 'til it dies. As little as the game demands of the player, it's easy to settle into a groove, and monotony isn't far behind as you have what feels like the same fight over and over and over again. To top it off, the only reward you receive is junk that can be sold to--you guessed it--customize your character. The multiplayer doesn’t suffer as heavily from these shortcomings, as it has social interaction and team-building to fall back on, but it doesn’t speak highly of an experience when outside forces have to come along to make it enjoyable.

The environments you have to explore don't help much with this problem either, and actually make the monotony worse. While there are sixteen different areas to visit over the course of the game, there are around 10 missions per chapter and only one or two new locations introduced in each. That means a lot of traversing the same areas repeatedly. Also, apparently Ace has a vendetta against variety, because you'll run into the exact same traps and groups of monsters in the same place each time you visit an area on a new quest. And again, the game rewards you for your 15th slog through the river path or mountain trail with more random stuff to add to your collection. Then you can customize other stuff that makes you strong enough to get more stuff and isn't this fun, everybody? It's like the game is trying to distract you from how mundane it is by waving pretty dresses in your face.

In Ace, the desire is there to take the well-loved universe of Ragnarok Online and revamp it for new systems. Those who enjoyed the original Ragnarok Odyssey will be pleased that Ace adds enough content to be more than a glorified recoloring. Most players will probably have at least a little bit of fun picking a silly hairstyle for their character and beefing up their stats, and die-hards of the genre may even like the repetitive monster battles. However, it's hard to deny that encountering the same enemy every time you approach that one rock formation gets predictable, or that a new item at the tailor's shop is a lackluster reward for protecting your outpost from annihilation. Your mileage may vary with a good team in multiplayer, or if you're a particularly resilient brand of old-line fan, but everyone else should tread carefully--for as decent an experience as it is, Ace's shortcomings threaten to turn it into a shelf ornament, which is a rough way to spend your hard-earned cash.