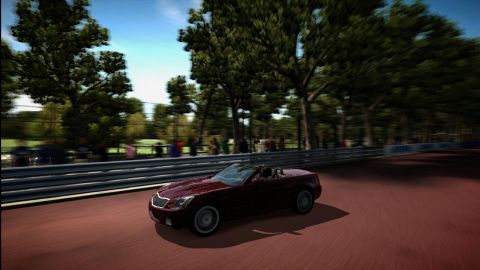 Sleek, powerful examples of superior engineering, capable of immense speeds and rendered in a seductive form, offering an exhilarating experience that symbolises passion, attention to detail and, of course, the chance to just plain show off.

Words used to describe the supercars that appear in Project Gotham Racing 3 can be just as apt to describe the PGR games themselves. At its optimum fidelity, however, PGR3 is a revelation.

The impression of speed and detail packed inside PGR3 is tremendous, and best enjoyed via PGR3's most considerable new offering - an in-car view.

The level of feedback available in-car is phenomenal, from the lurch of the driver as brakes are slammed on or the vehicle surges into a higher gear, to the slight shuddering of the interior under heavy acceleration.

There's a shift in attitude as well as perspective, and one that's just as welcome: PGR3's manifesto of accessibility. Aside from the main career mode, there's Playtime, where every track, and the majority of vehicles, are available from the off.

A handful of new career mode goals have been added - Time vs Kudos (the clock stops counting down while style points are being earned), Breakthrough (checkpoint-fuelled time trial) and Drift Challenge (earn a preset amount of kudos in a very short interval).

After being spoiled by the wide range of locations available in PGR2, PGR3's selection of five environments might seem slim, but each has enough local flavour - tarted up like never before - to compensate in both appearance and topography.

PGR3 hasn't moved from its niche. At its core, it's still pure PGR, a savvy and standalone mixture of real form and hyper-real function - but it's been transformed into a wondrous and rewarding beauty spot.

It further closes the gaps between player, pad, console and TV by offering something so luxuriously pliant and gratifying for all standards of player, and sits comfortably among the advantages of high-definition gaming - as was likely to be expected from such a series.

But that's not to rob Bizarre Creations of its entitlement to this achievement, in producing one of the most accessibly intense and outstanding racing experiences ever to be had, and felt.