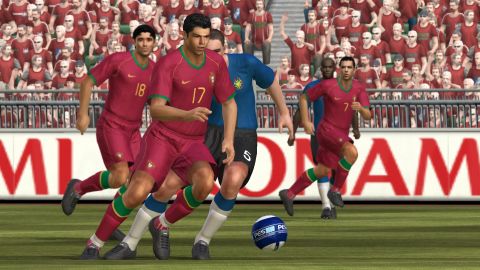 The Pro Evolution series has always done a fine job of replicating what’s happening in real professional football, and never more so than in its first run out on Wii. For the key to success in the game is playing with a quick pass-and-move style, keeping the ball on the deck, not holding on to it for too long and exploiting space. The control scheme, designed especially for Wii, is absolutely perfect for this. Result!

Pro Evo veterans will find the controls alien and not a little daunting. The pointer is used to direct passes and shots or drag off-the-ball players into space (more on that later), the B button is pass, the analogue stick steers the man on the ball while shaking the Nunchuk has you firing off a shot or a hoof upfield. What could have been crap happily turns out to be akin to cheering your team to a play-off final win. It is indeed tough when you start out, but either a decent session on the training ground - which is nicely presented, very well thought out and thoroughly comprehensive - or plenty of practice on the lower difficulty settings will put you on the path to glory.

So about that dragging of off-the-ball players. It’s a masterstroke and the game’s defining feature. While you’re controlling your man on the ball with the analogue stick, you can highlight a second player using the pointer and hold down A to take control of him. Drag an arrow into the space you want the player to run into, let go and then hit B to pass into that space and pick up the ball.

Timing is everything here, and yes, it takes a bit of getting used to - how they expect us blokes to be able to concentrate on two things at once is anyone’s guess - but after a few hours’ play it becomes second nature. Whether it’s feeding balls out to the wingers to make crosses into the box, or beating the offside trap and slicing defenses apart, this works like a dream.