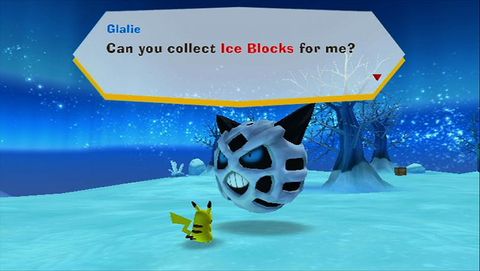 It may be a kiddy game, but PokePark Wii: Pikachu's Adventure is quite decent as far as Pokemon spin-off games go, if you approach it with the right mindset. You play as Pikachu, and your adventure consists of exploring the park and unlocking new areas by playing the various attractions (i.e. minigames) and making friends with all the Pokemon. Compared to the core Pokemon games, it's ultra simplistic and often repetitive, but the pretty graphics and Pokemon fanservice make itoddly compelling, despitethe minigame-heavy formulasounding terrible on paper.

At the start, you only have access to Meadow Zone, one of the nine zones in the park, but as you play the attractions and earn the respect of the Pokemon you quickly unlock more areas of the park. Each area has a distinct theme, making them all fun to explore, including fiery Lava Zone, frosty Iceberg Zone, Haunted Zone and so forth. Attractions are mostly uninspired minigame fare, including various motion-controlled races where you either have to waggle to go faster or tilt theremote to steer. As you progress, some of the later attractions are a little more respectable, like the tennis/Arkanoid-esque Bastiodon's Block Barrage.

To make friends with other Pokemon, they'll usually ask you to play one of five skill games, the most common of which is called chase, where you run after the Pokemon until you catch up with it. Other skill games include battle (a mini melee combat game) hide-and-seek, a short quiz and an mini-platforming challenge called obstacle hop. Since you have to make friends with so many Pokemon, the skill games get repetitive quickly, but they're each so short that it's not overly annoying, and the addictiveness of filling out your friend roster with new Pokemon outweighs the tediousness of replaying the game skill games tosome extent. Certain Pokemon also ask you to complete side quests to earn their friendship, like collecting logs for Bidoof to use as building materials, which also breaks up the repetition of the skill games quite a bit.

Once you've made friends with a Pokemon, you can play as that Pokemon in the various park attractions to set new records for each Pokemon and earn extra berries. You can use berries to level up Pikachu's stats, like his HP, dash move, Thunderbolt and Iron tail attacks. It's only a basic upgrade system, but it does add interest to the simplistic skill games, especially since some of the more formidable Pokemon, like the legendaries and fully evolved starters, are too tough to face without leveling up a bit.

Despite the bland attractions and repetition of the skill games, exploring the PokePark is still somehow fun and engaging if you're a Pokemon fan, in part because this is easily the prettiest Pokemon game to date. The Pokemon themselves also have strong and often funny personalities, which is a side we rarely get to see in the Pokemon series despite the games revolving around the titular beasts. We love the little touches too, like the absolutely adorable Pikachu animations that play during loading screens – after you see Pikachu's somersaults and pop and lock routine you'll actually wish the game had more load times. So while the spectacle of the park exceeds the actual rides, PokePark Wii is still worth checking out if you're a fan of the actual Pokemon themselves and just want a relaxing Pokemon-themed diversion.