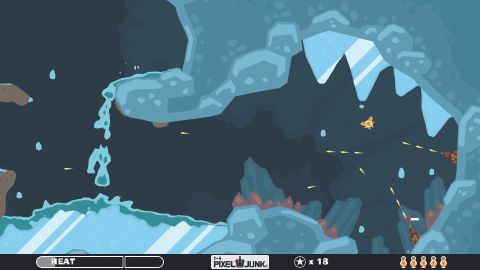 How many brain cells does it take to shoot an explosive barrel? Considerably less than you’ll spill with a well-aimed headshot. That’s the trouble with shooters -melon-splatting aside -they’re just not that cerebral. Quite why this game is called PixelJunk: Shooter is a mystery. There’s no over the shoulder viewpoint, sniper rifles or those ubiquitous explosive barrels. But there are more puzzles here than in a bumper book of Sudoku.

The aim of the game is to navigate a series of subterranean caverns, shooting weird lifeforms, gathering jewels and rescuing miners as you go. But there’s more to it than that. Complicating your progress are deadly flows of lava that can be diverted by creating pathways through the rock or cooled with water.

The physical properties of the liquids (and later gasses) are brilliantly realized – particularly the way in which they react together. For instance, introducing water to lava will create rock, dousing oil with water will make gas, and so on. Understanding these principles is often the key to success. That, fast flying and even faster thinking.

The gameplay develops beautifully by introducing flammable gas, fast freezing ice and ship seeking oil. There are even temporary ship upgrades that allow you to spew lava, squirt water and excavate the rock with an improved grapple. Developer Q-Games have excavated several generations’ worth of evolution and taken things back to basics. The end result has more in common with Asteroids than Gears of War, but its smart physics-based puzzles make it so much more than a retro oddity.