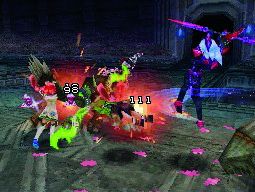 How the mighty have fallen. That’s what people would have you believe anyway – and we can’t say we blame them. Phantasy Star Online, the Dreamcast’s pioneering series that brought online RPG action to consoles, undoubtedly peaked with Episode I & II on GameCube, suffered a gross misstep with Episode III: C.A.R.D Revolution before going off on a tangent with Universe, hemorrhaging active players and dividing the opinions of the Phantasy Star faithful in the process.

Zero, then (which is how that ‘Ø’ doodah is pronounced, in case you were wondering), is something of an olive branch for those still pining for the classic PSO style of play, resurrecting the Dreamcast/GameCube mechanics and distilling the old magic into a more portable form.

Respect where it’s due, Sega have managed to nail it – Zero plays just like PSO. It feels right and it’s all comfortingly familiar, right down to the hypnotic ‘Whom… whom…whom’ of the timed triple combo. Other PSO stalwarts are back too. The six-slot palette of commands for magic and attacks returns (forcing you to think carefully about which actions are readily available to you in the field of play) along with your customisable MAG – a tiny robot that boosts your abilities depending on what you feed it.

Likewise, the game’s structure remains the same. Teleport to a stage, hack your way through to the boss encounter then return to town to shop and manage your inventory. Rinse and repeat – and don’t expect many surprises. Okay, so Sega might have played it safe with this one, but it’s exactly what every Phantasy Star fan wanted.

Let’s face it, though: World of Warcraft this ain’t and Phantasy Star fans aren’t a common breed. For anyone coming at Zero with fresh eyes there’s plenty to criticise – and even series veterans will find things to grouch about. For starters, there’s the way the touchscreen has been completely wasted. You can’t use it for menu or inventory selection on the fly, which means anything not kept in your six-slot action palette is a life-threatening fiddle to access in the heat of battle. It’s an unnecessarily limiting oversight and a real annoyance.

Furthermore, the D-pad is a less than ideal input for a game like this, and with camera adjustment consigned to centering with L (or messing around with rotation using X) the controls make your knuckles feel like they’ve been lubricated with treacle. It’s almost as though, by obstinately attempting to shoehorn PSO onto DS, Sega neglected to embrace the benefits the hardware could have brought to the series.

The single-player game is also a little lacking, but then that’s always been the case. Zero tries its best by fleshing out the story with anime cutscenes and a ludicrous amount of inane dialogue to read through (skip, skip!) but there’s no escaping the fact that solo players will find it a tedious, repetitive grind.

To be fair though, if you buy an online RPG to play on your own, you really do deserve every miserable hand that life deals you. Zero is meant to be played online, and in teaming up with three friends or strangers you’ll discover an RPG that’s both enchanting and, hour-for-dollar, exceptionally good value for the money.

Enlivened by the hilarity of Visual Chat (a means of communicating, PictoChat-style, with teammates), four-player action lets you power through stages faster and, on the tougher difficulties, begin to appreciate the subtler strategies the game has to offer. At its monster-bashing, technique-casting, rifle-blasting best, Zero can feel beautifully energetic and almost dangerously compulsive. But, most importantly, it can foster a real sense of camaraderie.

It is, without a doubt, the most social game available on DS (be prepared to edit friend code listings like there’s no tomorrow), with a welcoming community of players happy to adventure and trade. And for us, that’s proved just about enough to rekindle our love for the series. Zero – what a hero.