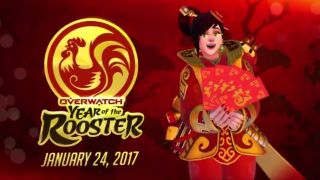 Overwatch's Year of the Rooster in-game event won't just be a token acknowledgment of the Chinese New Year. A video leaked from Chinese social media site Weibo and shared on Reddit shows Mei, Mercy, Symmetra and other heroes getting new skins, plus the tease of a new Capture The Flag mode.

Fans are speculating whether or not the new CTF mode will be Tracer only, similar to how the game's Christmas event added a mode that had everyone play as Mei. But really, we just don't know yet what the deal is.

The Year of the Rooster event is scheduled to begin January 24 (hey, that's tomorrow!) so an official, English-language trailer from Blizzard is likely to be released soon. Try to hold out just a bit longer, Overwatch fans.