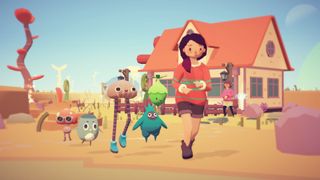 In the latest developer blog post - "devlog" as it calls them - Glumberland has highlighted a number of new features for its pastel paradise and hinted that this is finally the year the game launches. Long in development, the cutesy creature collector and farming game has been a favorite to watch in the indie games scene and their first update of the new year signals more wholesomeness is on its way to the final product.

After being in development since 2016, it sounds like it’s finally set to arrive this year. In the devlog, Glumberland said the launch has been "foretold in the prophecies/milestone calendar. That’s really all I can say about that right now so feel free to draw all sorts of wild conclusions."

Sea-dangling has been added to the game, which is fishing only you reel in needed supplies rather than snag any sorts of animals on a sharp hook. It’s a difference befitting of the game, which exists in a perpetual state of affection for its many unique creatures. With tongue firmly in cheek, the developer said the much-requested feature worked out because "as you all know sea-dangling doesn’t involve hurting any animals." Sea-dangling is tied to the "Reconstitooter" system which repurposes supplies into bait - don’t ask us why wooden planks need bait.

Also new to the game is a badge-delivering Ooblet. When you complete new badges, the Mayor now sends an Ooblet to personally deliver the badge right away. Previously players had to track down the Mayor to receive their unlocked badges and Glumberland calls this change an improvement as the old system "was a huge pain."

New cooking and gardening animations have also been added, in addition to more lore being written into the game’s unique world. The developer promises another new update next month which is set to include more lore, improvements to the Mamoonia region, and more.

We recently featured Ooblets in our Big in 2020 series. You can find out why we’re excited here.