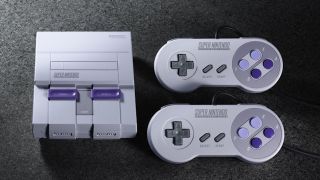 As someone who did not spend the early '90s gaming, the SNES Mini should be my gateway drug into the early Nintendo world. Having that opportunity - without needing to cobble together my own ROM collection or spending a small fortune on the Virtual Console - would be an incredible way to work through a gap in my gaming history. But one thing I've come to expect from a Nintendo launch is that, given the rabid levels of fanaticism that can decimate pre-order stocks in hours or minutes, I’m unlikely to get a chance at an SNES Mini soon. Possibly ever.

For decades now, Nintendo has doubled down on two audiences: kids and devoted brand loyalists. As someone who doesn’t check either box, I learned long ago that Nintendo simply wasn’t A Thing For Me. Given the other labels that do define my gaming tastes, though, it’s a little surprising that Nintendo doesn’t appear interested in broadening beyond its core groups, because it’s missing out on the potential to cultivate legions more fans.

Read more: Pokemon Let's Go review: "A wonderful blend of old and new, and an exciting glimpse at the future of Pokemon"

The SNES Mini is a perfect example of why I’ve chosen to mostly opt out of Nintendo: because the company made a product whose purpose is to modernize old titles, but then positioned it as solely for the people who already played these classic games back in the day. It doesn’t even feel like good fan service, considering how difficult it is to obtain one. It’s mountains of buildup and anticipation for the small chance of a payoff. You’d have better odds of winning the lottery or finding Willy Wonka’s Golden Ticket.

That’s even more frustrating when Nintendo just took us through the same song and dance last year with the NES Classic Edition. People freaked out with joy at the thought of owning one, a clear signal of demand. They promptly freaked out with sadness when the available supply was equally tiny. Then came the freak-outs of anger when manufacturing was discontinued even as the frenzied demand still burned.

To watch passionate players be so mistreated by their beloved Nintendo was…well, it was weird. I sympathized with their disappointment. But it also made me feel guilty for having wanted one in the first place, as if I wasn’t worthy because I hadn’t been through their emotional journey from the very start. And besides, considering how often Nintendo fans do seem to feel let down by the company they’ve long loved, maybe it isn’t a fandom I want to join after all.

Trading on nostalgia is a valid business choice. Any brand needs to know its audience to succeed, and Nintendo has defined its targets with precision. But the way the company has presented itself to the public in recent years has made it near impossible for anyone outside those bullseye circles to break in. And when a glimpse inside that inner circle shows hours of gaming pleasure counteracted by hours of frustration in how the company rolls out an appealing product that’s at once a gateway and a preservation effort, the prospect of breaking in is all the more puzzling. That’s a disservice to Nintendo’s reputation, history, and contributions to the world of games.

Observing the highs and lows of Nintendo fans who have been in the game since the beginning does make me curious about whether the new generations will have the same experience. Is nostalgia for childhood fun part of being a Nintendo person? Is a conflict-ridden relationship with the brand also encoded in the fandom’s DNA? Will the kids whose first console is the Nintendo Switch one day find themselves railing against the limited run of the Switch Classic in twenty years’ time?

Only time will tell. But from this particular outsider’s perspective, Nintendo’s audience of lifelong fans means it will always be held to the standards of its best work, whether it happened ten years ago or ten days ago. That’s not a reasonable demand for a player to make of a game company, but unconditional love isn’t always reasonable. For me, mild apathy is the safest, sanest way to experience Nintendo.