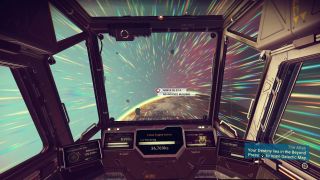 Remember that No Man's Sky ARG that grabbed Reddit's attention back in June? It's come to a close, and Hello Games' Sean Murray has revealed exactly what all the hullaballoo was about: update 1.3, dubbed "Atlas Rises," coming to PC and PS4 at an unspecified point later this week.

In a memo sent to participants of the ARG, Murray says that he and the team at Hello Games have been "listening intently" and that the ARG was a way to "reach out and celebrate the devoted community that means so much to us".

As for the update itself, Murray says that it "focuses on improving the central story of No Man’s Sky and adds the ability to quick travel between locations using portals". That may not sound like much in the way of content, but Murray also notes that full patch notes will be made available before the update goes live. I'd wager we'll learn more then.

Were you let down by No Man's Sky's launch version? Maybe check out how the Foundation and Pathfinder updates have improved the game since then.