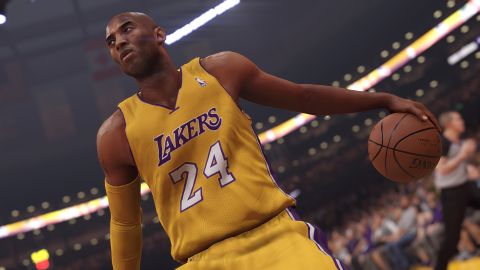 Elton Brand has just ordered me to carry his suitcase onto the Atlanta Hawks team bus. I politely tell Elton that he can go fuck himself. He stands there scowling at me, and informs me that this isn’t over, and that rookies like me should be ‘more respectful’. No, I’m not having some kind of basketball-themed cheese-dream. I’m playing the new My Career mode in NBA 2K14 next-gen, and it’s… bizarre.

Visual Concepts has made some significant changes to NBA 2K14 for next-gen. I’ll return to the My Career, and other mode stuff, in a minute--but first: how does it look, and how does it actually play? Well, the first thing you’ll notice is the fact that it's incredibly gorgeous. Crowds are now much more varied, advertising screens reflect beautifully onto the hardwood, and players look eerily lifelike. Some are better likenesses than others--Derrick Rose and Kevin Durant are highlights--but on the whole it’s amazing to see how realistic they look. It’s great to see legendary players recreated in such detail too.

Animations and collision physics are improved too. Players now transition more smoothly from one animation to the next, which makes you feel more in control of everything you do. There’s a real game of cat and mouse every time you try to stop a nippy point-guard like Jrue Holiday driving to the basket, because every bump and shove feels more natural. As a result, the whole game feels quicker and more urgent.

There are problems, though. Players occasionally snap to animations, which feels like a real loss of precision. Example: my opponent sets a screen to free up an outside shot. I shouldn’t be bothered by the screen because there’s a gap for me to squeeze past, but the game automatically puts my player into the stumble animation because he’s deemed to be within the ‘screened zone’. On the infrequent occasions this happens, it can be deeply frustrating.

Presentation is a mixed bag too. I love the new Points of Emphasis options that allow you to pick general offensive and defensive styles at any time (so you can shut down an opponent’s perimeter game, for example, without delving into the pause menu), and the new substitute system is more intuitive. Much of the commentary, sadly, is ripped straight from 2K14 on current-gen, which itself was chock-full of repeated banter. Again, it’s something that feels old in a game that looks and plays wonderfully new.

Finally, Doris Burke. After many years of just being a photo and a voice, Doris now appears as an in-game character, interviewing players at half-time and after the game. It’s a fantastic idea, and the players look and sound natural as they talk about how the game is going. Doris, however, stands next to them like a waxwork, stiffly holding a microphone in their general direction. Doris is trapped in the uncanny valley. She’s bought a house in the uncanny valley. She’s having her mail forwarded to the uncanny valley. It’s an example of a great idea being sullied by not-quite-perfect execution.

While My Career is all menus, messages, and waxwork David Stern on PS3 and 360, the next-gen version of 2K14 has brand-new cut-scenes and a proper story. And a higher-res waxwork David Stern. The pacing is different too--My Career on current-gen just throws you straight in, whereas PS4’s career mode tells a tale about your first game, your draft, your team-mate friendships etc.

Which brings us neatly back to the modes. My Career--the series’ most popular aspect of the game--has been transformed into a soap opera. Your character (I called mine Bagpipe Outlaw) now appears in cut-scenes where he chats to his agent, talks smack with rivals, and even drives to the stadium in his car. It’s a natural extension of the traditional career mode, and adds heaps of depth to the concept of ‘having a career in the NBA’, so the intention is admirable.

There are some neat moments, like when your agent pops round to your flat for a game of NBA 2K (so self-referential), or when you see your character fretting for their career at the draft ceremony. However, for every neat little scene, there’s an immersion-ruining let-down. Your character still has that generic voice that doesn’t quite fit any face, and for all the fancy new presentation, post-game press conference questions and pre-draft interviews are virtually identical to those in 2K13 and 2K12. It’s a real shame that old-game dialogue has been retro-fitted into this next-gen presentation.

The worst part, however, is the way that actual players and coaches can’t speak at all (because they haven’t been voice captured)--so while you chat to team mates, they stand staring at you like a dead-eyed serial killer while their portion of the conversation appears as a subtitle on the bottom of the screen. It’s a little… creepy. Recording dialogue from every player in the NBA, though, is a near-impossible task, so while this halfway house is a little unsettling, it’s understandable. I’d rather have the player interactions this way than not have them at all.

In all, My Career deserves big plaudits for breathing life back into the mode--it’s a welcome refresh, if imperfectly executed. My GM (former Association) has been given a presentation overhaul too, and you can now choose a specialisation when you start, to give preferable conditions on things like contract negotiation, training costs, team-mate chemistry, etc. It’s much more pleasant than digging through the imposing spreadsheet menus of the current-gen version, but the depth is still there. My Team? The new Park online mode? They’re still in the game, but I haven’t had chance to play them before release. 2K is promising tournaments for My Team, which will allow you to win rare players, so that sounds good at least.

Overall, NBA 2K14 on next-gen is ambitious, but flawed. While the majority of the on-court improvements are brilliant, they’re let down by certain aspects of the presentation that either feel old or imperfectly implemented. Don’t misunderstand: this is absolutely the best version of NBA 2K14, but despite the big visual and storytelling improvements, the game has brought plenty of baggage with it from current-gen. And no, I’m not putting those bags on the bus either, Elton…