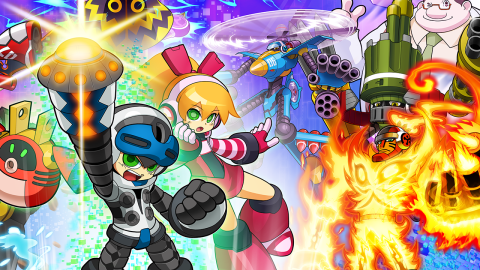 Frustrating to play and a pale imitation of Mega Man, Mighty No. 9 is unlikely to command the same reverence as its older cousin.

Mighty No. 9 clearly wasn’t paying attention to the careers advice at school. It makes a terrible first impression. After one of the most successful Kickstarter campaigns ever, developed by the masterminds behind Mega Man, you’re right to expect more from the first mission than horribly cheap-looking animation, wooly platforming and a boss who can insta-kill you. Soldier on past that, though, and a decent game starts to appear.

Even if you’ve never properly played a Mega Man game it’s instantly apparent that Comcept are making one with a different name. Main character Beck is an enthusiastic ‘bot who needs to chase down the rest of the Mighty Numbers, who’ve gone rogue because of a computer virus. Defeating them allows Beck to not only cure them of their temporarily fried circuits, but absorb their weapon as well. You even get to choose the order in which to face them. I’m sure the blue bomber would be beaming with pride.

Let’s talk about those boss fights first. Each one has a weakness to a certain type of weapon, and you take them down by learning their patterns and exploiting their natural aversion to gunfire. The problem is that there isn’t much spectacle. These are the game’s standout moments, but for most of them you’re trapped in a small space, rehearsing patterns and dodging. Eventually, some of them - and bizarrely, mainly the early bosses - will have insta-kills that feel unnecessarily punishing, leading to a frustrating grind where once a boss wipes out all your lives, you need to go through the entire level again. While there’s plenty of personality to each character and the weapons they provide, the actual fights themselves are more archaic than nostalgic.

To be fair, the bosses’ personalities - and acting throughout - helps keep the game entertaining, be it intentional or not. Mighty No. 2, Cyro, spews more awful ice puns in this than Schwarzenegger in Batman & Robin, delivering them with a childish glee that makes up for their inherent dreadfulness. Mighty No. 6 Avi’s eye-in-the-sky routine is delivered with the gusto of a villain in a DTV Steven Seagal movie. Lines get repeated an awful amount, and better people than me will snap at hearing “Awww, is yiddle Beck hurt? Here put some ice on it!” for the 15th time. The refreshing lack of pretension is much more interesting than the actual structure of boss fights themselves.

In the biggest twist to tradition, Beck needs to soften up regular enemies and then dash into them to finish them off (not like that). Doing so builds up a combo if you rush into them quickly enough, and will sometimes dispense a timed power up or speed boost. It adds a layer of aggression and risk to combat - you always want to remain close to keep your multiplier ticking up, which gives the shooting an enjoyable, pacy rhythm.

As you go through unlocking weapons, you may develop a bit of favouritism towards one or two guns, but it quickly becomes clear that if you use anything other than the ice gun, you’re doing it wrong. Trapping enemies in ice not only stops them from lobbing bullets at you, but also extends the time you can use them to build your combo. If you want to build up the highest rating, the Cyrosphere (to give its proper name) is your best option. It’s slightly unbalanced if you care about your score, but you’ll need each weapon for taking on a specific boss, and there’s fun to be had experimenting with each one.

The dash also has another purpose to serve for the platforming. Mega Man’s ability to semi-stick to the wall isn’t here, but Beck has the power to get across bigger distances with his powerful boost. It’s not a great trade off as the level design is punishing when it comes to the running and jumping. Movement is a little imprecise for jumps - mistime and you can’t recover by hopping up via the wall - but still manageable. The real problem comes from sections that demand far more control than you’re given. One section in Cryo’s level mixes slippery platforms with falls into insta-death spikes, and requires precise air dashes. Muddling through might not be so bad if it was once and done, but fail the end boss with zero lives, and you’ll be trudging back to do it again.

And you will be trudging back a lot, which does a huge disservice to the variety in level design. Each time you hop into one, there’s a new idea or twist on the gameplay that gets much better as the game trundles on. Early levels tick off cliches - there’s a bizarrely ugly water level, one where you go underground, a chase on a highway where cars act as platforms - but the game gets creative later on. My favourite is the Mighty No. 8 mission, set in The Capitol Building, a narrow loop of rooms that get defaced by the sniper you’re chasing the further you get in. All suffer from overexposure though, as it’s likely you’ll run through a level three or four times minimum before taking out the boss. What helps eases the frustration are boost drops that come into play if you die constantly. They can be turned off in the menu, but they’re an invaluable aid when you’re facing a boss who's had your number for the past hour.

After the gnashing of teeth from numerous delays, it’s a shame that Inafune & co’s remix of their greatest success is just passably adequate. For every idea that elicits appreciation, there’s the enforced repetition that deflates the initial buzz or a frustratingly cheap missed jump that sends you hurtling back to the start and your pad into the wall. As you work through the game, the core blasting and dashing is solid, the levels get more experimental and there’s a goofy B-movie charm that will keep you attempting to reach the end. How close you get it depends on how much you need a baldly nostalgic Mega Man clone.

Frustrating to play and a pale imitation of Mega Man, Mighty No. 9 is unlikely to command the same reverence as its older cousin.