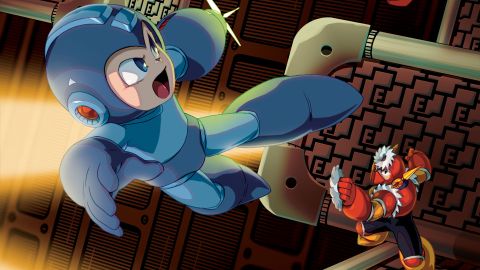 Legacy Collection perfectly preserves six classic Mega Man games without any extensive modifications. What changes it does bring are entirely optional and only serve to enhance the experience.

Mega Man re-releases have dotted the video game landscape for decades. From PlayStation to iOS to Wii U and more, the Blue Bomber is always close at hand. But not since his debut on the original NES has he enjoyed the sort of reverence shown in the Mega Man Legacy Collection. This is not a simple rom dump rush job. Here, the games are the stars - meticulously preserved and adapted for modern hardware.

Spanning Mega Man’s first six games, Legacy Collection is a proper remaster of those NES classics. Switching between games and tweaking the options is fast and unobtrusive thanks to developer Digital Extreme's elegant interface design. In fact, the developer's hand in this feels almost entirely absent, which is great if you just want to enjoy some 8-bit bot-blasting action. And when you're ready for more, Legacy Collection is happy to put your skills to the test with its devilishly designed challenges.

Playing classic Mega Man today feels like fighting a professional boxer. It hurts like hell, but you respect the skill and craftsmanship on display. Gradually - as your muscle memory develops - sections that seemed impossible become trivial, and your accomplishments feel that much sweeter because they were earned in sweat (and, on occasion, broken controllers).

Challenges are a fun way to flex your newly developed muscle memory. The best stitch together sequence from different Mega Man stages - or even games - to create a digital obstacle course. It's an interesting way to re-experience parts of a game you may have played hundreds of times in the past, and it rewards your dedication with medals, additional challenges, and leaderboards.

At the same time, these challenges double as good way to practice some of the games' tougher sections. Spend a few hours shaving seconds off Gutman's perilous platforming section and you'll discover it's not so tough in the regular game. Unfortunately, practicing a challenge is more cumbersome than it should be since there's not a quick way to restart a challenge. What should be a one-button convenience is instead a three-step annoyance, and while that's not enough to sour the fun, it endures as a constant irritation.

Digital Eclipse has likened Legacy Collection to the Criterion Collection, but one key element is missing: context. The Criterion Collection excels at providing interviews, commentary, analysis, and behind-the-scenes extras that give you a greater appreciation for the art by enabling you to place it in the right historical context. Legacy Collection does an excellent job of presenting these six Mega Man games, but does not tell us why these games were so important back in the late '80s and early '90s.

The Legacy Collection's lineup is presented in a very clean, crisp style that looks great on modern hardware. Edges are sharp without any fuzziness mudding the visual fidelity, and colors remain vibrant without becoming oversaturated and garish. Unless, of course, that is what you're after. If so, Legacy Collection offers two optional screen filters designed to give the game a low-fi feel. Combine them with the 'wide' screen resolution - which stretches the frame out to fill the entire screen - and you'll have a truly nightmarish vision of Mega Man on your hands. The 'original' and 'full' options are a far better choice.

In addition to viewing options, Legacy Collection also lets you change your controller inputs. This may seem like a minor point, but it prevents a repeat of what happened with the GameCube version of Mega Man Anniversary Collection where the fire and jump buttons are reversed. Among the controls is an autofire button, which is both a helpful tool and a nice throwback to third-party controllers riddled with autofire switches.

While you can change various options and settings around these games, Mega Man 1 - 6 are all perfectly realized, including any limitations the original games possessed. For example, if too many sprites appear on the screen at once the game will slow down and certain images may start to flicker. This same principle applies to the music and sound effects as well. In the interest of preserving these games in their original form, Digital Eclipse doesn't address most of these issues, and the Collection is better for it.

Staying true to the original design also opens up the possibility for fun glitches. I wasn't able to test every glitch under the sun, but I was able to pull off simple stunts like using Item 1 during the Airman boss fight to trigger a warp to Wily 2, or using the pause button to rack up multiple hits with a single shot. It's nice to see techniques like that are still supported in this new Mega Man, as goofing around with glitches - or utilizing them in a speed run - is a valid part of the Mega Man experience.

Aside from the occasional glitch, perhaps the biggest crutch Mega Man Legacy Collection throws your way is a quick save and load system for every game. You can use it any time (such as right before a boss fight) and you don't have to worry about overriding saves between games. Alternatively, you can also ignore this function and stick with the classic password system from Mega Man 2 onward. This is a clear improvement over the Mega Man Anniversary Collection which forced a clunky autosave on you after each boss fight and removed the password system entirely.

If you want to practice your boss fight without relying on save scrubbing, you can also hit up the Museum and Database dedicated to each game. These include tons of official artwork, concept sketches, and enemy descriptions. Those descriptions are especially nice for Mega Man loyalists as it gives you the name and function of each enemy in the game. On a more practical note, these descriptions also list the robot's weakness, and you can challenge any of the robot masters directly from their pages.

It's interesting to see the ideological differences between Digital Eclipse's Mega Man Legacy Collection and Atomic Planet's Mega Man Anniversary Collection. Atomic Planet wasn't afraid to try and improve upon the classics with an updated HUD, mapping quick weapon swap to the shoulder buttons, and the aforementioned autosave feature. Digital Eclipse is the exact opposite, having preserved these games in their classic state while ensuring they look and play better than ever before.

Legacy Collection doesn't muddy the water with superfluous features, and ensures its six games remain true to their original counterparts. However, it also comes up short, totaling only six games compared to Anniversary Collection's ten. We can only hope the rest of the Mega Man series - including the excellent X games - receive the same care and appreciation displayed in this collection.

Legacy Collection perfectly preserves six classic Mega Man games without any extensive modifications. What changes it does bring are entirely optional and only serve to enhance the experience.

Maxwell grew up on a sleepy creekbank deep in the South. His love for video games has taken him all the way to the West Coast and beyond.
See comments