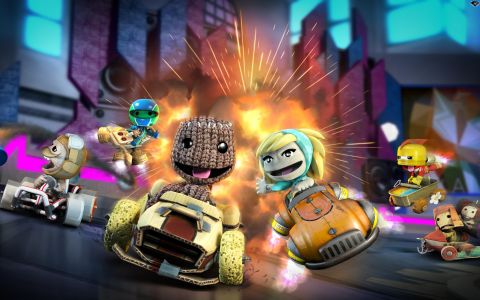 The adorable Sackboy returns, but this time saving the Imagisphere requires a bit more speed than what his stitched together legs can provide. LittleBigPlanet Karting takes the adorable aesthetic of LittleBigPlanet’s crafty art-style, adds the tried and true driving mechanics of the best kart racing games, and includes the seemingly unending customization of the lovable franchise--crafting a great racing experience for the PlayStation 3.

The campaign starts with Sackboy commandeering a kart racer so he can drive off the Hoard--a group of evil sack creatures that speed through the galaxy stealing anything they can-- by defeating them in a variety of racing challenges. The majority of the campaign’s levels are standard track races, but you'll also take part in variations on arena battles, side-scrolling platforming, and boss fights, keeping you thoroughly entertained the entire way through.

Developer United Front Games (makers of Modnation Racers) didn’t just take the LBP brand, slap together some race tracks, and call it a day; it also included several unconventional game types. In the battle arenas players fight over objectives, like a steal-the-bacon-style battle in which both teams attempt to grab batteries from a central location and bring them back to their respective base. In another, players control a fire-breathing monster truck from an isometric camera perspective and must navigate city streets while destroying mine dropping trucks. There is plenty of variety in the level design and gameplay to keep you coming back to earn every single reward.

The only setback in the single player story mode is the huge amount of dialogue you encounter before each race. Before going into each event on the planet map, long-winded event descriptions and cutscenes preceed that just reiterate on the filler story. The overly wordy dialogue is the typical LittleBigPlanet affair, but it slows the pace when you're eager to get into the next event.

LBP Karting offers solid controls, challenging tracks, and stiff competition. Sometimes, maybe a little too stiff. You're able to pick up weapons and power-ups to use against the competition, but we also found that being the leader of the pack can be detrimental to your chances at winning. Taking first place early results in your kart taking a barrage of rival weaponry from the rubber band AI kicking in and is sure to quickly drop you back into last place. Blocking attacks with your equipped item proves to be an essential ability, but more often than not, starting ahead near the beginning had us playing catch up for the entire race.

Otherwise, all of other the standard kart racing conventions are there and work very well. You’re able to drift around corners (gaining a bonus speed boost if done for a certain amount of time) get speed boosts from rocket panels, and avoid environmental hazards by using your grapple gadget. Add to that, worlds imitating 1950’s commercials, Medieval fantasy lands, and a space disco combined with charming music to go with each theme. It all creates a thrilling experience in each race.

While the story mode is enjoyable, the majority of your time probably won’t be spent racing or participating in the levels the developers created; it will be spent customizing, creating, and sharing tracks you’ve created in the level editor. You can to create a variety of game types and race tracks using the multitude of edit tools and logic features from the pop up "Popit" menu. The online multiplayer also allows you to jump into races and games created by other players. Best yet, the easily digestible tutorials ensure that every tool and option is thoroughly explained. Even a novice level designer will be able to dig in and create their own levels in no time.

Customization is one of the key draws in LBP Karting. In the pod (LBPK's main hub), you will be able to decorate essentially everything; including your kart, the interior of your pod, personal planet, and Sackboy. Additional items, costumes, stickers and vehicle parts are earned from picking up "prize packs" spread throughout the campaign races. You could spend an excessive amount of time just mixing and matching the clothing options, or tweaking your ride. It’s incredibly addictive and extremely entertaining.

With all of the options to create your own race tracks and battle arenas plus solid kart racing experience, LittleBigPlanet Karting stands tall among its competitors. The customization features alone can have you spending hours playing with costumes and decorations. The races and events are thrilling and the rewards are gratifying. LittleBigPlanet Karting does an great job of mixing franchise's creative features and delivering strong racing gameplay to make one of the most adorable and enjoyable kart racers you can find.