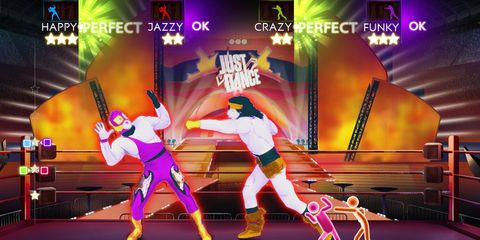 The Just Dance series is settling into a groove going into its fourth iteration. Rather than making any real changes like Dance Central 3 did this year with its story mode, Just Dance 4 closely retreads the same territory as its predecessors. That isn’t necessarily a bad thing, as the game box boldly claims it is the No. 1 best-selling dance series in the world. Success breeds complacency though, and while Just Dance 4 is every bit the life of the party that last year’s game was, it’s also much the same game with a new coat of paint.

Oddly enough, one of the biggest knocks against Just Dance 4 is its menu screens, where you pick songs. For the series’ second outing on Kinect, Ubisoft attempted something different with menu navigation. Selecting a menu option requires you to physically reach out with your hand and then pull your hand back to confirm the selection. Reaching forward makes it very easy to tap the wrong song, and pulling your hand back only registers properly about a third of the time. It’s hardly intuitive, and should act as a model for future Kinect developers on how not to do their menus. In a party situation it can bring the festivities to a screeching halt as frustrated friends skip their turns rather than make another failed attempt at selecting a song.

Once you do successfully choose a song, Just Dance 4 finds its rhythm. Up to four friends boogie down in front of the Kinect while mimicking the on-screen dancer’s moves. Stick figure dance prompts fly in from the bottom right to give a heads up on what moves are coming next, but they are often so vague that it is better to just watch the eclectically dressed silhouettes.

Not that you need to follow the moves closely to succeed. Just Dance 4 is quite lenient when it comes to strictly following the dance routines. Perhaps it’s in part because so little feedback is given as to what you’re doing wrong or how to improve, but it is also very much by design. Just Dance 4 clearly wants to be accessible to everyone, and isn’t afraid of handing out encouraging scores to entice shy players to join in. Don’t be surprised if your rhythmically challenged friend still manages to net four stars on their first try.

Just Dance 4 thrives as a party game. All 43 songs are available right from the get-go, so you don’t have to worry about blitzing through a single-player mode to unlock that one special song before inviting friends over. It borrows heavily from recent Billboard top 40 charts, with the likes of Carly Rae Jepsen, Rihanna, Nicki Minaj, and Justin Beiber making up the bulk of the soundtrack. Even with so many modern hits, there’s still room for dance classics with the occasional Elvis Presley, Stevie Wonder, Rocky Horror Picture Show, and even Rick Astley’s rick-rollin' classic “Never Gonna Give You Up” on the menu.

Many of the songs showcase duet and dance crew choreographies designed for two or four players. The B-52’s “Rock Lobster” has players bumping hips while “Istanbul” by They Might Be Giants allows each of the four dancers to spend some time in the spotlight before breaking into a conga line. The dances are conscious of other players, which makes it feel more like you’re actually dancing with friends rather than just the screen. The downside is that for those songs, there are only duet or dance crew choreographies, which means solo gamers will feel all the more lonely when prompted to dance with imaginary partners.

While the full song list is available from the start, additional modes can be unlocked as you progress. Alternate dances can unlock for certain songs and dance mash-ups return from Just Dance 3, along with the new dance battles mode. Dance battles pit two players head to head in five rounds of dance-offs. As a nice touch, dance battles use unique choreography, but it’s hard to take them too seriously for competition with the game’s already lax grading standards. It’s also utterly ridiculous that dance battles--really the only new feature in Just Dance 4--must be unlocked considering the game’s accessible party mentality. Matters aren’t helped by a random unlock system, where you have to spin a wheel for a one-in-five chance of unlocking something worthwhile. The unlock system is bafflingly bad for any type of game, but even more so for a pick-up-and-play party game like Just Dance 4.

While dancing and hopping around to the rhythm can be a good workout on its own, the Just Sweat exercise mode also returns in Just Dance 4. As the mode suggests, it will definitely get you sweating in 10, 25, or 45 minute routines across a handful of musical genres. There is even a calorie counter this time around to tell you how much you’ve burned, though it’s more of a novelty since it doesn’t take things like age, weight, or heart rate into account. Obviously Just Sweat won’t compete with a dedicated fitness game, but it’s hard to deny that it still offers a decent workout.

There is no doubt that Just Dance 4 is lagging behind Dance Central 3 in terms of features, modes, and even just accurately sensing your moves. But sometimes that added depth can be a pretty big barrier for entry, especially in such a physically demanding game genre. Just Dance 4 may not have all of the right moves, but bust it out at a party and everyone is sure to be on their feet.